MPs back freeze of beer tax for pubs

MPs showed support for a freeze or reverse of the beer duty escalator during a House of Commons debate during the early hours of Tuesday morning. 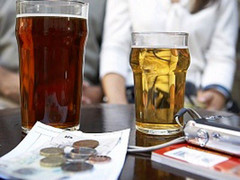 The adjournment debate attracted 38 MPs, who stayed in the Commons until past midnight to support Gavin Williamson’s call on the Government to ease the tax on beer sold in pubs.

Tax on beer currently rises at inflation plus 2%, but Williamson, Conservative MP for South Staffordshire, said the tax was hitting British jobs.

Williamson said: “The simple reality is that beer duty is getting to the point where it is too high and it’s pricing people out of the market.”

But Chloe Smith, economic secretary to the Treasury, responded to the calls from MPs for the beer duty escalator in particular to be abandoned by pointing out that the policy has already been accounted for in Government finances until 2014/2015, and removing the inflation-plus-2% escalator for all alcohol types would cost the Treasury £35m for 2013/2014 and £70m in 2014/2015.

“The duty increases that we are talking about forms a vital part of the Government’s plan to tackle the debt left by the previous Government,” she said.

“It would be worse for everybody if we did not tackle that debt. When I say “everybody”, I mean beer drinkers, cider drinkers, spirit drinkers, wine drinkers, brewers, publicans and, of course, all those who never touch a drop. The high interest rates that would result if we abandoned our credible plan to tackle the deficit would not help anybody.”

She added that the decline in the beer and pub industry is due to a “number of factors”, including lifestyle changes. “Removing the escalator and the pre-announced duty increases would not solve those problems.”

However, the minister did promise to “keep all taxes under review and monitor the impact of alcohol duty”.

The British Beer & Pub Association has welcomed the move and described the adjournment debate as a show of strength, with around 40 MPs in the chamber towards midnight to raise strong concerns about the issue.

The association says the issue must be kept high on the agenda of MPs – an e-petition has already collected over 60,000 signatures – a total of 100,000 will trigger a fuller debate in Parliament.

“With Beer Tax up 42 per cent in four years, tax revenues are being undermined, jobs are being lost, especially in pubs, and a great British manufacturing industry is thwarted from fulfilling its true potential, at home and abroad.

“Chloe Smith has said the issue will be kept under review – thanks to the many MPs from all parties who showed such strong support last night.”