Hite-Jinro, the biggest producer of alcoholic drinks in South Korea, has introduced warning labels on its products in Seoul in conjunction with a police crackdown on violent incidents involving alcohol. 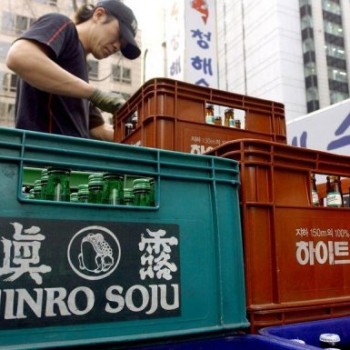 The labels, which appeared this week on bottles of beer and soju encourage drinkers to refrain from violence and improve the country’s drinking culture.

A spokesperson was quoted in the Chosun Ilbo, a national newspaper, as taking responibility “for social problems caused by drinking” and hoping to make drinking culture “more positive”.

Hite-Jinro is the biggest producer of alcoholic drinks in the country, and its Jinro soju product has been ranked as the world’s best-selling alcohol brand, having sold more than 61 million cases last year.

South Korean adults are the biggest consumers of spirits in the world, drinking 9.57 litres per head in 2005, according to data published last year by the World Health Organisation.

A poll this year found that alcohol was a factor in almost a third of the 3 million serious crimes – including murder, robbery and rape – recorded over the past five years. Drunkenness was cited in 76% of public order offences and 44% of cases of domestic violence.

The government is expected to outlaw the sale and consumption of alcohol in public places such as hospitals and to ban alcohol advertisements on public transport and outdoor hoardings, local media reported.