German beer brand Warsteiner is hoping its sponsorship of the European Golf Tour will help it seize a “big chance” in the UK beer market. 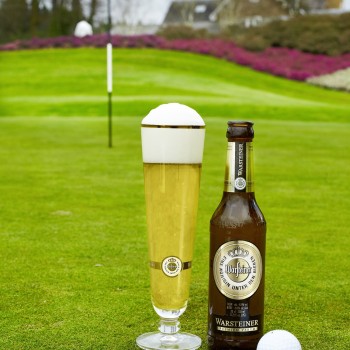 “We see the UK as a big chance for our brand,” Warsteiner’s international sales director Oliver Jaensch told the drinks business.

“It is a consumer led market and that is to our advantage as beer consumers are becoming more educated and are wanting a new experience.

“We can take advantage of consumers thinking beyond their usual borders because our beer is seen as an international premium craft beer.”

Warsteiner was named the official supplier of beer to The European Tour and was present at the BMW PGA Championship at Wentworth Club in Surrey.

That was the first in a string of European Tour event sponsorships planned for the brand as the company is also sponsoring events in Italy and the Netherlands.

“We have signed a three year contract with The European Tour and we see this an important route to market in the UK, Italy and the Netherlands,” continued Jaensch.

“Warsteiner is a premium imported beer and golf is a premium sport and an event like BMW PGA Championship fits in well with our brand. It was a great event for us to be involved in as it matches the core values of our brand in terms of international class, craftsmanship and modern communication to the consumer.”

Commenting on the craft beer trend in US and the UK, which has seen craft beer brewers like BrewDog making the most of the current market conditions, Jaensch said: “It is a strong niche beer and it is a strong consumer group which is growing strongly. It is developing well in the US and Canada. The world beer category – where we place ourselves – is not only craft beer but more about heritage and a play about taste.”