A new spiced rum is looking to fill the gap its creators believe was left in the market following the recipe change to the Sailor Jerry brand. 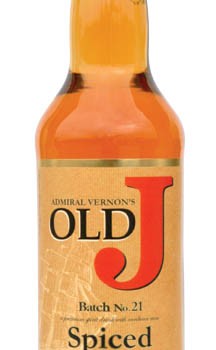 Promising “a secret blend of seven spices, including sweet vanilla and Persian lime,” Old J aims to satisfy the online backlash which followed the relaunch of Sailor Jerry two years ago.

Explaining the idea behind the creation of Old J, Tom Hurst, brand manager for LWC Drinks, observed: “There was a big campaign on social networks to bring back the old [Sailor Jerry] recipe at the time with 26,666 likes on petition page on Facebook before the page was frozen.

“In  2012 I left First Drinks to join LWC and my first project was to develop a new product to exploit this big space in the golden rum category.”

With an RRP of £16.49, the product is currently available from a number of off-trade outlets and will be on show at Rumfest this October.

Meanwhile a spokesperson from First Drinks stressed “Sailor Jerry continues to perform well”, remarking: “We have maintained our number two position over the last two years and are confident of continued success.”

Citing data from market research firm TGI, the company observed: “The number of drinkers enjoying Sailor Jerry are up +8% year on year and we will continue investing in the brand to ensure prolonged growth.”