A US craft beer, Fordham, is sponsoring two UK athletes along the path to Olympic glory. 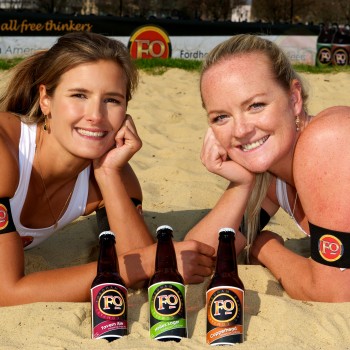 Beach volleyball players, Zara Dampney and Shauna Mullin, are competing in a series of qualifying matches around the world in their final push to qualify for Team GB at this summer’s Olympics.

The team will be announced just weeks before the London 2012 games open in July.

Heathwick, UK importer of the Fordham range, is sponsoring the British players as part of their £225,000 investment in Fordham over the next 18 months, and spotlights their “Try Something New” marketing campaign for the brand.

The campaign will rebrand the sport as “FO-lleyball” – echoing the distinctive “FO” logo on Fordham bottles and fonts.

Graham Richardson, general manager of Heathwick, said: “There’s going to be a real buzz around Beach Volleyball in London and right across the UK this summer, with the Olympics giving this fresh and exciting sport a high profile.

“With the Fordham range building distribution in London and the South East, we’re sure both beer lovers and sports fans will be ready to try something new by watching beach volleyball while enjoying a glass of our award-winning American craft beer this summer.”

Mullin added: “Representing Britain at the Olympics would be a dream come true for us and the culmination of many years of training and competing. The next couple of months are crucial in securing our place in Team GB.”