New look and launches at Bowmore 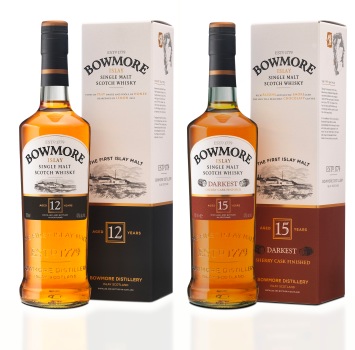 On top of launching a new gift box and a refreshed bottle design across its entire domestic and GTR offering, the brand has launched its new whiskies “100 Degrees Proof”, “Springtide” and the limited edition Bowmore 1983 into GTR.

Morrison Bowmore describes the new carton as “ a distinct modification from the traditional tube packaging and supports its premium brand positioning and strong brand personality.”

A statement added: “The changes are also in response to consumer demand for a greater level of education on the taste experience and the history of the whisky and as such the new packaging communicates the brand’s unique status as the first Islay Single Malt and its 200 years worth of experience and heritage.

“The new look reinforces Bowmore’s ‘gift-ability’ as it features a greater level of foiling and gloss embossing thus creating shelf stand-out. The updated distillery illustration has a warmer and more emotive look and feel that strongly conveys the whisky’s roots, that is the magical island of Islay, giving category differentiation and shelf appeal.

“The design of the bottle has also been enhanced, with the label featuring a sleeker look to ensure back bar stand-out and differentiation.”

The company is also keen to emphasise how the new packaging has improved the brand’s environmental considerations, with the bottle being made of lighter weight glass and the new cartons being 100% recyclable.

Kirsteen Beeston, head of brands at Morrison Bowmore Distillers, said: “We are excited to be taking Bowmore into a new era with this new gift box and bottle design.

“This has been a key priority focus for us over the past year as we wanted to ensure the design not only better represents the brand’s core values but also develops a stronger, more defined brand personality that consumers can engage with. We hope that this exciting change will contribute to our continued growth.”