Last Tuesday Hong Kong witnessed a tasting that cemented the reputation of both a famous vintage and an even more famous personality. 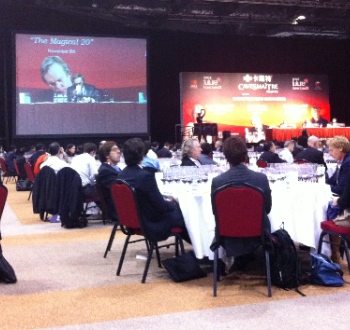 The vintage was 2009 Bordeaux, a harvest which attracted unprecedented attention when released in 2010, but also prices which elicited outrage.

The personality was Robert Parker, a wine critic influential enough to be accused of encouraging the alteration of wine styles to suit his palate – one which is supposedly only excited by rich fruit and high alcohol.

But on his first major public tasting in Hong Kong, 1,000 people, primarily from China and eastern Asia, but also the UK, Europe and the US, were charmed by his modesty, moved by his passion, and captivated by his learned and persuasive approach during his tutored tasting of twenty wines.

The event was WineFuture and the tasting – dubbed by Parker, “The Magical 20” – was a selection of wines from châteaux, which, the critic believes, are making wine of ‘first growth quality’ (although not within the region’s uppermost tier).

Importantly, all the wines were from the 2009 vintage, a harvest only recently bottled and one which is soon to be delivered to buyers.

It was also a year which instigated such excited commentary when tasted by professionals in barrel during spring 2010 that – after three unremarkable vintages, and during an economic recovery – it brought on a bout of frenzied buying.

But with the advent and realisation that 2010 in Bordeaux was another “great” vintage, despite climate providing the happy coincidence, the reputation of both harvests seemed to suffer.

Merchants were accused of hype and the châteaux owners of greed. Meanwhile, prices of the 2009 vintage plateaued, and in some cases, declined.

But then came last Tuesday, and Parker’s decision to focus on the vintage, because, in his own words, “It is one that is easy to drink young”.

And, as the tasting came to an end, as reported by db, Parker said, “I feel validated that this is a truly, truly magnificent vintage”.

Already, there is evidence of price movement for Parker’s chosen wines for the tasting from 2009, ironically, just days after he admitted in a press conference that his influence was on the wane, and had been since 1996 when he hired his first assistant.

Although one may not agree with all his choices in the Magical 20, Parker explained, “It could have been the magical 40 or 50 given the qualitative revolution that has taken place in Bordeaux in the last two to three decades.”

Parker also spoke of his ongoing respect for Bordeaux in an incredible piece of publicity for a region already in vogue in the Far East.

“Bordeaux is the epicentre of the wine world; it is where so much knowledge and quality comes from, and it’s the largest producer of high quality wines in reasonably large quantities,” he said.

He also referred to “two types of great vintages” during the tasting.

Then he said, “The other style that Bordeaux produces is – although I don’t like to use sexist terms – more masculine, more powerful, robust, tannic, dense, and concentrated, but also backward, foreboding and almost difficult to understand when young.”

“Unlike 2009, these vintages are not much fun to drink early on, these are vintages which are for very patient people who can wait for those tannins to melt away into the wine and to soften up, and that can take 5, 10, 15 years.”

Parker also stressed the positive influence of outside investment in Bordeaux for raising the quality of the wines, and paused to thank each representative from the chosen châteaux during the tasting.

It was undoubtedly a historic event, one which saw Parker’s profile raised in Asia, Bordeaux’s fine wine status re-affirmed, and the 2009 vintage validated as one of the greatest in the last 100 years.

It was also near-priceless publicity for those châteaux chosen to represent first growth quality as the Magical 20.

Meanwhile, as for Parker himself, his image was undoubtedly altered for the better, even among cynical members of the British fine wine trade.

For example, Simon Staples, sales director at Berry Bros. & Rudd, who attended the tasting, expressed his respect for the critic, despite his admission he is guilty of “Parker bashing”.

Indeed, Staples summed up generously but accurately the reaction of those in the room. “This was first time I’d ever heard Parker do his thing and I was quite blown away… he came across as humble, extremely knowledgeable – deferring to the customer as the person who makes all the decisions – and I was totally captivated.”