Champagne Philipponnat has taken the unprecedented step of releasing both the 2001 and 2002 vintages of its single vineyard Clos des Goisses at the same time. 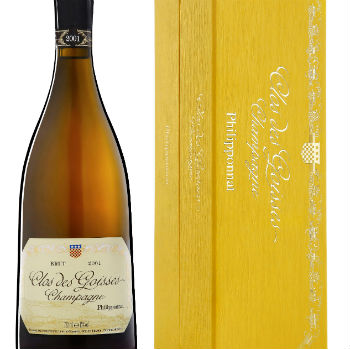 The south facing, 5.5 hectare Grand Cru site is an average 1.5˚C warmer than the rest of Champagne, making it the ripest vineyard in the region, able to produce a vintage in all but the very worst years.

The 2001 release is controversial, as a rainy summer followed by a cold September made for a notoriously difficult harvest, with only a sprinkling of houses declaring a vintage. In contrast, 2002 has been named one of the best Champagne vintages in recent history.

Rather than comparing the two, the “Burgundian” 2002 is being pushed as a wine for laying down, while the “buttery” ’01 is said to be ideal for enjoying immediately.

“Releasing the two vintages together will be a good way to show that Clos des Goisses makes great wines in top vintages, but also, and most importantly, in so-called lesser vintages,” said Charles Philipponnat.

“Its especially ripe terroir allowed Clos des Goisses to be harvested one week before the rain that eventually wrote off 2001.

“Connoisseurs should buy the 2002 for long cellaring, and will still be able to enjoy an open Clos des Goisses with the 2001,” Philipponnat added.

Earlier this year, Philipponnat admitted to db that he wasn’t sure what to do with the 2001 vintage, due to its tarnished image: “The problem is not with the wine but the reputation of the vintage,” he said.

But Gareth Birchley of Bordeaux Index is excited about the release, telling db: “We’ve been chomping at the bit for a double release, and will take whatever we’re given of it.

“It’s fine to release the two vintages at the same time, as they serve completely different markets. It won’t affect profits, as it’s produced in such tiny amounts.

“I’d go for the 2001, as the off vintages of Clos des Goisses have the most interesting character, but the 2002 will be traded more, and will go on for at least 50 years,” Birchley added.

Philipponnat will also be releasing small volumes of Clos des Goisses from the famously ripe 2003 vintage at a later date.