As with any good brand, there’s always that reassuring feeling when you go to a D&D restaurant that, however much they tweak the décor, the food and service will be uniformly above average. 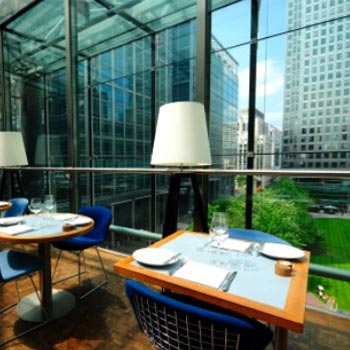 It’s certainly a great comfort when you find yourself wandering the skyless streets of Canary Wharf, disorientated by the imposing but charmless skyscrapers of a landscape which could just as well be Dubai or Düsseldorf.

For all those citing Docklands as a stunning example of urban regeneration, it’s really just an upmarket version of Milton Keynes.

Wandering up to one of the faceless office blocks, the map promised us that there would be a restaurant on the fourth floor. It looked unlikely, but we emerged from lift into Plateau, which offered us the choice of a restaurant, its more casual grill and the Johnnie Walker Blue Label Terrace, all sharing a view over the precious green space of Canada Square.

We started by joining the smokers on the terrace, which apart from a slight breeze wafting in under the awning, feels very much indoors. Even as non-smokers it was tempting to try something from the cigar list and complete the Mad Men fantasy with a whisky cocktail.

We restrained ourselves however and skipped past the front page Johnnie Walker specials in favour of a lighter Holy Goji Champagne cocktail. I can’t vouch for its virtuous effect as a superfood, but it was a tasty start to the evening.

Having had our passive smoking fix, we moved through to the grill. My salad of bright tomatoes and creamy balls of goat cheese was let down slightly by the leafy green element, which seemed to be there purely for aesthetics rather than flavour. Even a handful of peppery rocket would have earned its keep better. My friend had exactly the same comment about the green accompaniment to her otherwise delicious plate of proscuitto.

The single sheet wine list offered plenty of interesting options, but we decided to put ourselves into the hands of the sommelier, who brought a glass of wine to match each dish.

A brief consultation about our preferences might have been reassuring for both sides, but she ended up choosing for me two wines I could well have ended up ordering if left to my own devices: a simple 2010 Languedoc Sauvignon Blanc for the goat cheese dish and then, with my perfectly seared and seasoned tuna steak, a glass of 2009 Tyrell’s Pinot Noir.

Meanwhile my dinner buddy found her New World Merlot a touch overpowering for the proscuitto and was brave enough to tell the sommelier. I was therefore a bit worried when she was presented with a Marlborough Sauvignon Blanc to accompany her very generous portion of fishcakes, but the Babich 2010 showed some refreshing, food-friendly restraint.

We shared some triple-cooked chips, which on several other occasions have let me down badly, either arriving disappointingly soggy or in a pretentiously stingy lattice. These proved top notch in both quality and quantity. Since we were in the grill rather than the restaurant, I abandoned my fork to enjoy them properly.

As we prepared to ease ourselves into pudding mode, a bonus amuse bouche arrived from the kitchen in the form of a shot glass of strawberry coulis, yoghurt and basil oil. Light, with intense but beautifully balanced flavours, it cunningly revived our flagging appetites.

Moving on to the puddings proper, my friend chose chocolate, cookie and cherry from a tempting selection of ice creams. They arrived in beautifully presented, intensely flavoured individual scoops, although so soft that they collapsed on impact with the spoon.

As a rare female Port enthusiast, she was delighted by the chilled glass of Warre’s Otima tawny which appeared alongside.

Meanwhile, I was contemplating two scoops of lemon and elderflower sorbet, studded with raspberries, which made the dish look alarmingly like a molecular model from the school chemistry department.

Compared with the piercingly clear flavour of my lemon sorbet at Franco Manca the night before, the elderflower made this altogether more blousy and floral, which paired beautifully with its accompanying Muscat de Rivesaltes.

It’s not worth making a detour to Canary Wharf just to eat here – there’s a host of places, D&D venues included, in more attractive, accessible parts of London.

However, if you do happen to find yourself trapped among the loud pinstripes and gleaming towers of this urban jungle, Plateau offers a welcome sanctuary.