Chicken tikka may be the UK’s national dish, but it’s just as impossible to imagine what the country’s diet and high streets would be like without pizza. 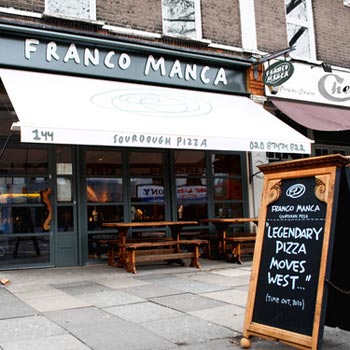 Debate simmers on the acceptability of thick crust, stuffed crust and pineapple topping and there are more “Top 10 Pizzeria” lists out there than you can shake a jalapeño at. The one consensus everyone seems to reach is the inclusion of London’s scruffy Brixton pizza joint Franco Manca somewhere near the top billing.

Its resulting popularity only makes it more difficult to secure a coveted plastic table at this small venue, which doesn’t take bookings and closes at 5pm. For many therefore, especially west Londoners nervous of venturing into that uncharted wilderness south of the river, last year’s opening of a second Franco Manca in leafy Chiswick solved a frustrating problem.

In keeping with its location, the Chiswick branch has been given a more airy, though still pared back image – exposed pipework, wooden tables and place mat paper menus, all enlivened by charismatic artwork on the walls. Best of all, it’s open for dinner and you can book.

The options are reassuringly concise and did-I-read-that-correctly cheap: pizzas start at £4.50 and none exceed the dizzy heights of £7. On that basis we thought we’d better have starters as well.

In keeping with the rest of the menu, the wine list is brief and firmly Italian. It leads with the house wine (£12.95/bottle), a Barbera/Dolcetto blend that tastes as if it’s come straight from a jug in some scruffy Piedmont osteria. In a good way.

The label alone (right) made us glad we’d ordered it. 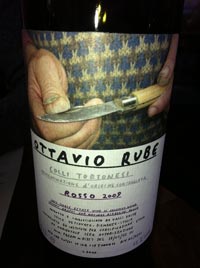 For the “less adventurous but still discerning diner” (patronising or thoughtful, you decide), there’s a choice of “more fruit driven and less challenging” Sangiovese or Trebbiano – no concessions to the Pinot Grigio crowd here then.

As if to fill its A3-sized menu, Franco Manca goes overboard on the descriptions of dishes, which then confound all the hype on paper by arriving as simply prepared as it’s possible to imagine. Hence what looked and tasted like a very delicious indeed, but hardly haut cuisine, tapas-sized sausage in tomato sauce appeared on the menu as “baked Gloucester Old Spot sausage with Alham Wood organic farm caciocavallo (Somerset), Brindisa’s cabezada (cured loin monrojo) and a touch of our single estate organic tomato.” It made me wonder if we’d been sent the right dish.

There’s plenty of detailed information about provenance on the reverse side of the menu; to have it all on the front as well feels like over-egging the pudding.

Meanwhile, the pure flavours of our other starter of baked aubergine, tomato and mozzarella would have been the perfect appetiser if the aubergine had been a little less charred. As it was, the finishing note of burnt toast fell just the wrong side of rustic.

And so, at last, to the pizzas from the recently introduced summer menu. For real geeks there’s plenty of information about method and origin on the back of the menu, but the main point that distinguishes Franco Manca from the crowd is its sourdough pizza base.

This gives a thin but distinctively bready character and soft crust. Perhaps it’s success lies in bridging the gap between those thin “middle class” bases and the chunky satisfaction of low-brow Pizza Hut. Only in England could pizza have class issues.

Crust may be contentious but, as indicated by the starters, it’s the quality of the toppings that sets these pizzas a notch above the high street chains.

Even for something as simple as my courgette, basil, buffalo ricotta and “Franco & Lloyd” organic Somerset pecorino, the flavour of each was perfectly clear and in balance.

Almost as if to distinguish themselves from their tightly regulated chain cousins, the pizzas’ topping distribution here is artfully dishevelled. This may leave the base rather sparsely covered in some places, but it’s worth cross-referencing the quality of the ingredients with the price before complaining.

This superiority really shone through in the pizza topped with home cured Gloucester Old Spot ham, mozzarella, buffalo ricotta and wild mushrooms: a world away from the hackneyed ham ‘n’ mushroom pizza.

They may get overshadowed by the main act, but Franco Manca’s puddings deserve an award for best supporting role.

We had to pass on some of the more interesting Italian delights on the menu in favour of the lightest options, a hit-the-spot affogato and then the sorbet, one scoop of lemon and one of grape.

The lemon was that perfect sweet and sour balance with ringingly clear flavour; the grape was rather less precise but nonetheless a refreshing lift to round off the meal.

This Chiswick arm presents a model of Franco Manca that the company could roll out in any one of numerous areas around London and beyond.

Next month the expansion plans step up a gear with openings in Westfield Stratford City, followed in 2012 by an as-yet-unconfirmed venue in central London. With any luck they’ll be coming to your area soon.