Treasury Wine Estates-owned 19 Crimes has added to its portfolio with its first lower-alcohol wine, a Chardonnay made in partnership with American television personality Martha Stewart. 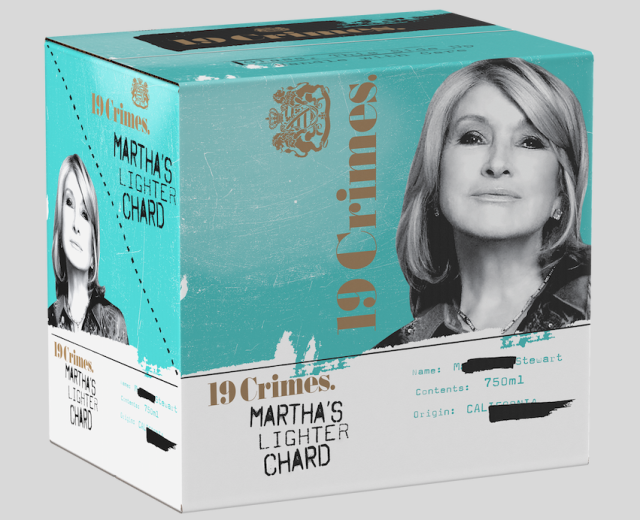 Perhaps aligning itself with the ‘damp’ drinking movement currently making waves across the internet, 19 Crimes has announced the launch of Martha’s Lighter Chard – an 8.5% ABV Chardonnay that clocks in at 80 calories per glass, according to the brand.

“I love my original Martha’s Chard but was inspired to make something a little lighter for those looking to avoid overindulging.

“Who says you have to sacrifice great taste while making healthier choices? Not with Martha’s Lighter Chard!”

19 Crimes Franchise Global Vice President, John Wardley added, “19 Crimes is beyond thrilled to add another expression from Martha Stewart to our collection. Martha is a beloved lifestyle guru and culture creator who continues to push boundaries in the wine category and we are excited for Martha’s Lighter Chard to hit our loyal 19 Crimes fans base and be a disruptor in the Better for You category, a segment that has grown 100% in the last year.”

Announcing the launch of the new expression on Instagram, 19 Crimes wrote, “We told you we were just getting started. Introducing Martha’s Lighter Chard. A chard that goes just as hard – with only 80 calories. Your New Year’s resolutions can thank us later.”

Martha’s Lighter Chard has an SRP of $14.99 and is available nationally across the US.

To discover the very best that the low-and no-alcohol wine sector has to offer, take a look at the results from the Global Low And No Alcohol Masters.

What is Damp January and does it work?