Last month, Louis Roederer cellar master Jean-Baptiste Lécaillon launched “the most important” set of Champagnes in the producer’s modern history, as he unveiled a late-release vintage series going back to 1990.

Introducing the bottles in London on 23 November, Lécaillon said that the launch represented “a very important event for Louis Roederer and maybe the most important event for me,” even though, he added, “it’s nothing exciting on paper – “there’s not much new in fact”.

The reason for his excitement stems from the fact that these vintage Champagnes from as long as 30 years ago represent something “deep”, and “the DNA” of Louis Roederer, he said.

Explaining further, he said these bottles are being unveiled to demonstrated the age-worthiness of the “wine behind the bubbles”, and in particular, the long-life of certain single-harvest cuvées based on Pinot Noir from the village of Verzy in the Montage de Reims area of Champagne – where Roederer own vineyards.

Furthermore, with the oldest vintage in the late-release series hailing from the 1990 harvest, these are wines that Lécaillon, who joined Louis Roederer in 1989, “grew up with”.

And it was from this point in Louis Roederer’s history that the house began putting aside bottles of its vintage cuvée for extended ageing.

“It was not in the family’s mind to keep old vintages… I was frustrated talking about the ageing potential but not being able to demonstrate it, so I started putting aside a few bottles from the 90s to be able to showcase the ageability behind the bubbles,” he said.

Importantly, the late release vintage series – which comprises five Champagnes from the ‘90, ‘95, ‘96, ‘97 and 99 harvests – are not recently-disgorged. They have been aged in Louis Roederer’s cellars for extended ageing after disgorgement having been disgorged at the same time as the standard releases.

However, unlike the original release of the Louis Roederer vintage expression, these late-release bottles were given a slightly lower dosage of around 8g/l, because Lécaillon – knowing he would release them at a later date – decided they would not need the same level, which was around 11g/l in the 90s.

In total, around 1,000 bottles and fewer than 500 magnums will be released of the five vintages, priced at around £550 and £270 for a single one of these respective formats.

Lécaillon said that he had chosen to launch the vintages at the same time, rather than sequentially, because “we want to focus on our estate in La Montagne [de Reims].”

He also commented that the Champagnes were at an ideal stage in their development. “The wines really show their full potential between 20-30 years: it’s what I call ‘the window of beauty’,” he said. 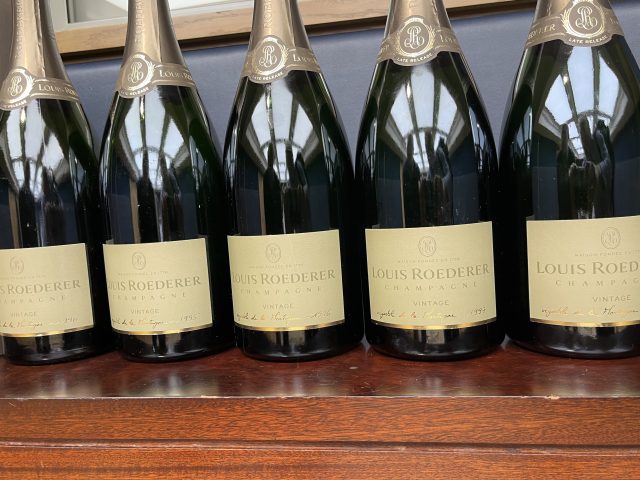