Christmas is fast approaching, but there’s more to drinking and dining in London this December than mulled wine and bratwurst.

The interior was inspired by East London’s textile industry, but it’s what’s outside that really makes this a spot worth keeping in mind: situated on the 11th floor of Canopy by Hilton London City, the bar boasts of a spectacular view of St. Pauls, Canary Wharf and the Thames. And what better to enjoy a great view with than a great drink? Head mixologist Serena Carrino, previously of Nightjar, has devised a clean, crisp and aromatic selection of cocktails, including Alma, a herbal cocktail made with Casamigos Blanco, Hibiscus Amores Espadin, Ancho Reyes, lavender syrup and citrus, and Inca, made with El Gobernador, maraschino, marigold syrup, lemongrass air and citrus. There will also be non-alcoholic cocktails, and a menu including oysters, lobster rolls, beef tartare and a charcuterie board.

Having initially debuted in Beirut, Mayha will be bringing Japanese omakase to Marylebone. Chefs Jurek Wasio and Yuichi Nakaya originally worked in the Lebanese site, and will now be serving Londoners a seasonal menu using high-quality British and Japanese ingredients. As is the nature of omakase, the menu will change daily to reflect what the chef wishes to cook. There will also be a range of expertly-sourced sakes, wines, beers and spirits. The ground floor will have a curved stone counter where guests will be sat as the chefs prepare that day’s tasting menu, whereas the lower ground floor, accessible by way of a wrought-iron spiral staircase, will have a Japanese raw bar (the counter of which is made from scorched timber) and a courtyard. 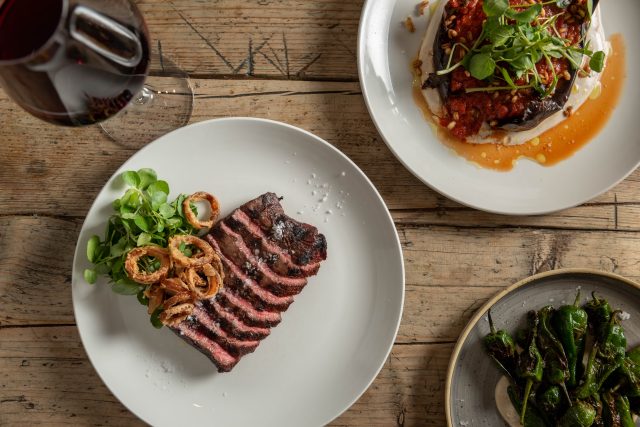 The London wine bar collective will be opening its sixth site on Topsfield Parade. As well as 400 sustainably-produced wines, sourced by Humble Grape’s talented wine team, the 65-cover-site will be serving signature small plates, including crispy cauliflower with lime aioli and chilli ketchup, and slow-cooked Halloumi with tomato ragù. The venue, which is dog friendly, also has an outdoor terrace, though perhaps for the winter, diners may prefer to sit in the semi-private Cellar Room, which seats 12.

Caviar in South Kensington, what could be more luxurious? Opening its first UK deli and restaurant, the French caviar house will have your stocking fillers sorted: a range of caviar (and mother of pearl spoons), foie gras, smoked salmon and vodka, among many others. Though the café will not be opening until January, the deli has opened just in time for your Christmas gift-buying.

Set in the newly-refurbished Battersea Power Station, TOZI Grand Cafe will be positively sparking with the energy and opulence that one might expect from Venice, not London. Coming from the same team behind Italian restaurant TOZI near Victoria Station, this new site will be open seven days a week from 7am to 11pm. There will be everything from an all-day menu of classic Venetian cicchetti to internationally-beloved pastries, including pistachio cannoli (this writer’s personal favourite). As for signature dishes, the lobster linguine with garlic and chilli is singled out. While the drinks selection has the aperitivo hour classics that one would expect from a venue of this nature, some of them have been given unusual twists, such as an olive oil Negroni.

Not so much a new opening as a relocation – the two-Michelin-starred West African restaurant is moving from St. James’s Market to The Strand. Co-founders Jeremy Chan and Iré Hassan-Odukale said: “The space we have designed will allow us the chance to fully express our interpretation of seasonality through bold heat and intensify the techniques we have worked on for the past five years”. Among the interior changes is the addition of a private dining room for six. However, the highly-acclaimed menu of “spice-based cuisine around British micro-seasonality” (as the website calls it) will remain.

If you’re seeking more ways to get into the festive spirit in the capital this month, check out db‘s list of 10 of London’s best Christmas events.