Prosecco Superiore brand Val d’Oca has expanded its Classic Cuvée range in time for Christmas to include an Extra-Brut style. 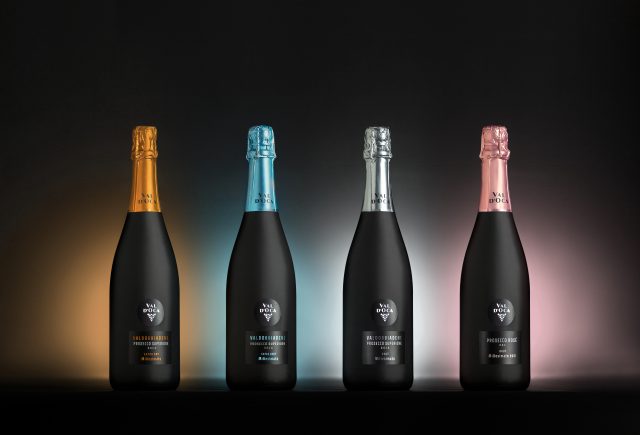 The gold-capsuled Extra-Dry and Brut expressions in silver, have been joined by an Extra-Brut with a blue foil and a Rosé Prosecco in pink, with all four presenred in elegant matte black bottles. The new wines have been launched in Italy’s on-trade and are being shipped to importers around the world.

“We believe the Extra-Brut will appeal to a more discerning consumer who is looking for something with less sugar and more complexity,” says Val d’Oca’s managing director, Alessandro Vella. “It is a classic, sophisticated Prosecco that is aimed at medium to high-level restaurants for pairing with food.”

Val d’Oca is the brand for one of the region’s leading cooperatives – the Cantina Produttori di Valdobbiadene which celebrated its 70th anniversary this year.

“People in Italy recognise Valdobbiadene as the historic birthplace of Prosecco,” says Vella. He believes the award of UNESCO World Heritage status in 2019 has helped differentiate the ‘heroic viticulture’ of Prosecco Superiore grown on the hills from Prosecco made from the Pianura Padana plain, at least in the minds of Italian consumers.

“More and more people are looking for better quality,” he says, pointing to the success of Val d’Oca’s cru wines [known as ‘Rive’ in the DOCG] in Italian supermarkets. “We’re seeing double digit growth every year with our Rive, and for us this is a clear signal that things are changing.”

In export markets the level of consumer recognition of Prosecco Superiore varies greatly. “And there are also some markets that are very price-driven like Germany where the average price is 30% less than Japan,” says Vella.

One area in which all Prosecco consumers, regardless of nationality, can relate to the brand lies in Val d’Oca’s impressive record on sustainability. “We are the only wine company in Italy with all three of the important certifications,” says Vella, referring to Equalitas, which the company was awarded this year, and VIVA and SQNPI which it won in 2020 and 2021.

As a co-operative, Vella believes the Cantina Produttori di Valdobbiadene “has been sustainable from a social and economic point of view” since the day it was founded in 1952. While its commitment to the environment in reducing chemical treatments and water usage, while increasing recycling and the use of renewable energy began in earnest 15 years ago. For all these reasons, Val d’Oca was awarded first prize for sustainability among 2,136 Italian food and drink companies last year.