Distillery live-streams its whiskey as it ages in barrel

Hayner Distilling in Ohio has unveiled its Whiskey Webcam, which streams a live feed of whiskey while it aged for up to six years. 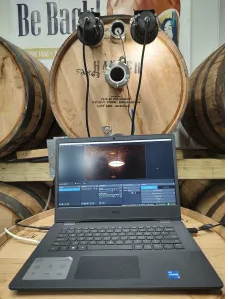 Those interested in the whiskey-ageing process may be fascinated to see what takes place inside the barrel and how the liquid changes over time.

Hayner Distilling has decided to offer anyone who pre-buys a bottle from one of its 125 barrels Bourbon the opportunity to watch their whiskey age via a live-web cam until it’s ready (the process generally takes from four to six years).

Buyers will receive yearly samples from their barrel and can choose when it’s ready to bottle and at what proof they would like their final whiskey to be. If they love the sample at four years old they can order their bottle at 90% proof (45% ABV). Or they can hang on until six years and order their bottle at 110 proof (55% ABV). “It’s your whiskey and your decision,” says the company.

“If you think about it, that first sip of whiskey is actually the end of a journey that whiskey began six years ago. We want whiskey enthusiasts to experience the entire journey of their whiskey from barreling to bottling to that first sip,” said Greg Taylor, president of Hayner Distilling. “Our tagline is, it’s about time. It’s about time someone placed a webcam inside a whiskey barrel, and with whiskey, it’s all about time.”

Claiming to be the world’s first patent-pending webcam placed inside a whiskey barrel, the Whiskey Webcam experience costs US$149. Subscribers can access the live feed via a QR code that comes with their personal membership card, at which point they will receive a message, saying “Welcome back. Your barrel has missed you.”

Consumers can choose from a Four Grain Bourbon Whiskey or a High Rye Bourbon Whiskey, and accompanying the live stream is a soundtrack of 1920s ragtime music.

“Can you imagine the anticipation of taking that first sip after six years of watching your whiskey age? That’s the experience we are excited to offer,” said Taylor.

Hayner Distilling is one of the largest distilleries in Ohio and the largest mail order whiskey business in America.