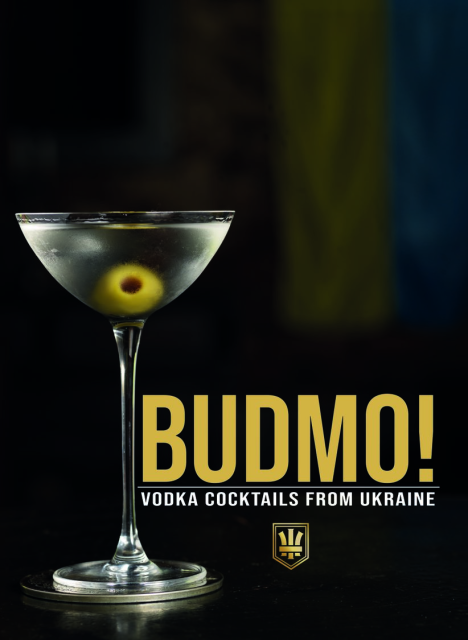 Other drinks include the Kyiv Mule, White Ukrainian, and Beetroot Bloody Mary, with links provided via QR code to reels of Deneiga demonstrating the cocktail-making process.

Meaning “let us be”, “Budmo!” takes the name of Ukraine’s long-established vodka toasting ritual, a hierarchical series of up to thirteen toasts between families and friends, beginning with a toast to the meeting and then ending with the toast originally performed by Cossacks prior to mounting their horses to continue their journey into the night.

“Vodka is an integral part of the Ukrainian lifestyle with generations of expertise and tradition behind it,” says Deneiga. “With different regional flavour profiles, it crosses class and status boundaries and is suffused into the country’s culture, uniting the nation. I’m delighted to be launching our first cocktail recipe book – it’s our priority to raise as much as possible to support the humanitarian needs of Ukrainian people while also highlighting the country’s amazing culture.”

Following 38 different flavour combinations and trials, Dima’s, awarded gold by The Spirits Business Vodka Masters, was created by Ukrainian-born Dima Deneiga in 2020 to challenge consumer stereotypes of vodka. The premium, crystalline vodka is distilled in a 125-year-old distillery in Zhytomyr on the outskirts of Kyiv using the rye, wheat and barley reaped from Ukraine’s world-famous black “chernozem” super soil.

In tribute to the elixir’s origin and Dima’s unique three-grain signature blend, Dima’s logo features an adaptation of the national coat of arms of Ukraine while the bold gold and dark blue of the label reflect Ukraine’s national colours.

The book may be ordered on its own (£25) or alongside a bottle of Dima’s (£55) with a minimum of £5 of proceeds donated to First Aid Ukraine.