Molson Coors has launched a thermochromic nail polish that changes colour when consumers are holding a cold beer. 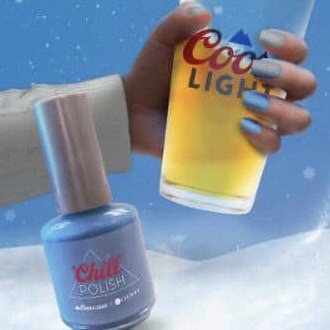 The nail polish, which has been created in partnership with Le Chat Nails, is the beer company’s take on bringing fun to the holiday season and echoes how Coors Light beer cans feature a special technology that allows the mountains in its logo to turn from grey to blue when the beer is chilled.

Coors Light ‘Chill Polish’, which has been introuced in time for the festive season and changes colour depending on the temperature, is set to remind people that “Coors Light is best served ‘As Cold As The Rockies’.

Kozanda explained: “By inserting itself in the conversation in a fun and expected way, Coors Light is offering yet another great example of not following the same old playbook that beer brands tend to use. When people wear Chill Polish, it’ll remind them to drink Coors Light. And it’s a great reason to try Coors Light if they haven’t already.”

Chill Polish will retail for US$7 at Coors Light’s online shop and batches of the thermochromic nail polish will drop every Tuesday at 10am until 13 December until stocks last.