The sale, which is now in its 162 edition, took place over seven hours in the packed saleroom at the Halles de Beaune in Burgundy, conducted with a relay team of four auctioneers, with an audience of around 700 people, in the room, online and over the telephone, with bidders from 30 different countries.

The auction offered 802 lots, comprising 620 barrels of red wines and 182 barrels of white wines, as well as an additional 17 barrels of eaux de vie crafted with the marcs (the solid remains of grapes) from the 2022 harvest. It also offered an additional 51 different cuvées of the 2022 vintage, produced from vineyards across the Hospices de Beaune’s 60-hectare holdings, which are in the second year of being converted to organic production.

The highlight of the sale was the Pièce des Présidents (Presidents’ Barrel), sold in memory of the late Louis-Fabrice Latour, the head of Burgundy négociant Maison Louis Latour, and a leading figure in Burgundy who sadly died in September, which set a new record, after a tense 20 minute bidding battle, selling for €810,000 (USD$832,995).

Although it was initially reported to have been bought by a group of individual wine négociants (including Badet Clément, Albert Bichot, Groupe Boisset, Bouchard Père et Fils, Champy, Chanson, Joseph Drouhin, Faiveley, Louis Jadot, Olivier Leflaive, Patriarche and Veuve Ambal), it has since been confirmed that the piece was bought by Maison Louis Latour and Maison Joseph Drouhin, with the support of the FNEB, for  €700 000, with the sum being  supplemented to €810 000  by the Burgundy Wine Growers and Trade.

A statement from Maison Louis Latour and Maison Joseph Drouhin said that each year, the auction inspires “a tremendous display of solidarity among Burgundy wine merchants, private companies and wealthy individuals”, and every year the amounts raised increases.

“2022 has been no exception, but is a particularly poignant year for Burgundy’s winegrowing community following the death of Louis-Fabrice Latour last September,” they said.

Latour’s widow Patricia was said to be “deeply moved” by the record-breaking sale, saying it was “the best possible tribute to Louis- Fabrice”.

“The fact that the other Burgundy négociant houses joined forces to contribute the missing 110,000 euros to make this piece an absolute record is highly symbolic to me,” she added. “This way, they have shown their support for a cause that meant a great deal to Frédéric (Drouhin, President of Joseph Drouhin) and to me personally: children in need in France and around the world (and more particularly children with cancer). But it is also a gesture towards Louis-Fabrice who contributed so much to Burgundy and the Wine Council: I am very aware of this and thank them for it.”

Drouhin added that there was “nothing more heartbreaking than to see a child ill, especially with cancer” – something he had experienced following the death of his own daughter, Romane.

“It was so fitting to make the purchase with Maison Louis Latour in order to support two associations that mean so much to us, in particular Princess Margot, to bring support and comfort to sick children and their families. We are very touched that our colleagues from the FNEB have joined us
to raise the €700,000 that our two families have shared, thereby donating a substantial sum to the associations.” 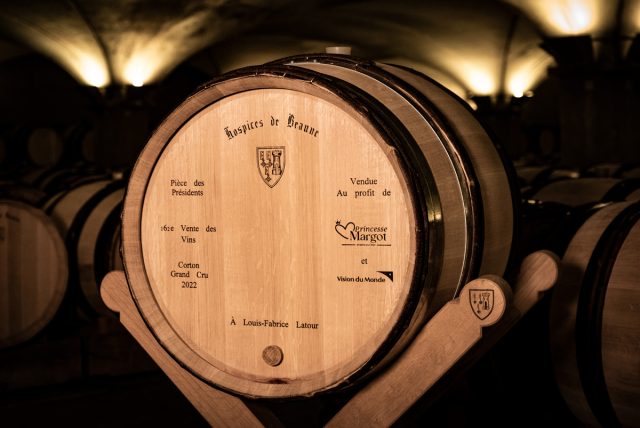 The proceeds of the barrel will be donated to the two designated organisations – the Princesse Margot association, which supports children with cancer, and the World Vision organisation, whose mission is to help vulnerable children.

The wine itself – a blend made from grapes from three terroirs, Corton Renardes, Corton Bressandes and Corton Chaume – will continue to mature in a special 228-litre barrel made by the Maison Latour cooperage, in collaboration with the Hospices de Beaune.

The négociants said they were happy to be there, alongside the Maison Louis Latour.

“It is an opportunity for us to help Princesse Margot and World Vision, but also to pay tribute to our late colleague Louis-Fabrice Latour, who was always a great champion of Burgundy,” they said in a statement.

Proceeds from the annual sale will continue to support the upkeep of the Hospices de Civils de Beaune’s hospitals.

François Poher, director and chairman of the Board of Hospices Civils de Beaune, said the historic and spectacular results of the sale were “a tribute” to the winemakers and team at the Domaine des Hospices de Beaune, its  hospital workers who “selflessly carry on with their mission”, the founders, donors, and Burgundians who support the land and traditions, and the “values of hospitality and fraternity”.

“The new record achieved for the Pièce des Présidents to benefit children’s causes is the best expression of this,” he said.

Jamie Ritchie, worldwide chairman of Sotheby’s Wine & Spirits, added that the record total was a testament not only to the ” exceptional quality of the Hospices de Beaune wines produced by Ludivine Griveau and her team”, but also to the “record worldwide demand for Burgundy from the finest producers”.

“The combination of a top-class Domaine and a wonderful vintage resulted in extremely competitive bidding throughout the sale. Representing the heart and soul of Burgundy, the auction attracted collectors from 30 countries, raising an extraordinary amount of money for charity, which will be used to help and support the community. The fact that today’s auction is also among the highest totals for any wine auction ever held is an additional tribute to the importance of this annual auction, which has been staged since 1859.”

22/11/22: The article was corrected following publication to clarify that the buyer of the Piece de Presidents was Maison Louis Latour and Maison Joseph Drouhin, with the support of the FNEB, and an additional supplement by the Burgundy Wine Growers and Trade.