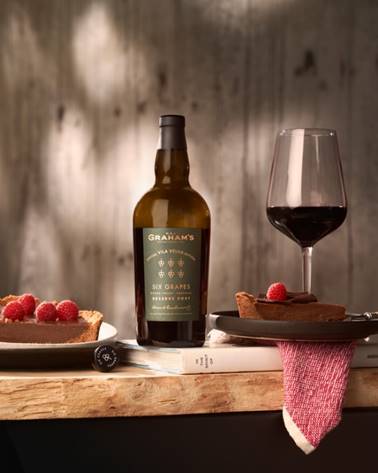 The ‘Special Vila Velha Edition’ has been released with just 12,000 bottles, and follows two previous limited bottlings of Six Grapes – one drawn exclusively from Graham’s ‘Old Vines’ and another from its ‘River Quintas’. It has been released in honour of James Symington, the third-generation port produce who purchased the Quinta da Vila Velha in 1987 and proceeded to restore it over the next 30 years.

The quinta, one of four Douro estates that supplies a key component in Graham’s Port, comprises 145-hectare along the river Douro, with 55 hectares under vine.

James’s son Rupert Symington, CEO of Symington Family Estates described the “floral fragrances of pine resin and eucalyptus, together with an opulent palate of concentrated black fruits” as “a wonderful expression of Quinta da Vila Velha and a fitting tribute to my father’s work”.

The Six Grapes symbol originated in the 19th century as a code that the winemakers at Graham’s used to identify the barrels containing the very best wines from each harvest, which were often bottled as Vintage Port. By the start of the 20th century, the barrels were use to make a reserve port, although the label fell into disuse in the 1970s when the Symington family acquired the port house.

However James Symington brought back the label, after a decade’s work and the Graham’s Six Grapes is now distributed in 38 markets. It has become one of the leading ports in the USA and has a strong presence in both the on- and off-trade across all five top markets: Portugal, US, UK, Canada & the Netherlands.