País, aka Listán Prieto, is the oldest vine not only in Chile, but in the Americas. One of the first Vitis vinifera varieties to be brought by the Spanish, it spread across the continents of North and South America throughout the 1500s and was the variety that gave birth to the incipient wine industries. 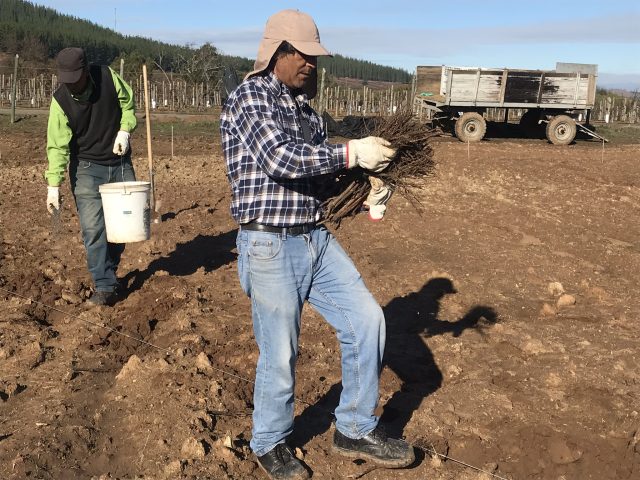 It was Chile’s most-planted variety until the late 1800s, and although plantings have dwindled to around 10,000 hectares today there is a renewed interest in the variety. In the past few years we’ve seen a flourishing of juicy, fresh red wines made from old vines in southern Chile. But the País revival has been driven by interest in old vines, rather than new…

Bouchon Family Wines is bucking that trend. “We decided to pull out some of our Cabernet Sauvignon vines in our Mingre estate in Maule because they simply weren’t doing well in the drought conditions,” explains winemaker Christian Sepúlveda. “When we were thinking about what to replant with, it occurred to us, why don’t we give País a chance as a new vine?”

Bouchon is already one of world’s greatest champions of País, making seven different wines including red, white, rosé and sparkling País. Today País accounts for over 10% of the winery’s production, which is no mean feat for an export-focused winery. But all of those wines came from old vines of País anywhere from 80 to over 120 years old!

In 2019, Bouchon planted a new vineyard of País — one hectare of ungrafted vines taken from a massal selection and planted as new bush vines. “We wanted to know what would happen to young vines of País if you plant it on really good terroir… so we planted it on the poor soils of our ‘in situ’ granite, which we believed would lower yield and reduce vigour. I think this site will have the potential for making serious red País wines that can be aged for a long time.”

Although País is very resistant to disease and drought, making planting ungrafted vines feasible in the dry-farmed region of Maule, there are challenges in planting new head-trained vines. “It takes a lot longer to establish head-trained vines,” admits Sepúlveda. “And although we had seen a lot of old vine País before, we had never worked with or seen new País vines!”

Bouchon did get its first, small, harvest this year from the new plantation, but Sepúlveda believes the best is yet to come. “It is a long term project and it will take years for the head-trained vines to establish themselves for quality production. But I believe in head-trained vines for the future of Maule and in face of climate change — you get 360-degree sunlight but without any direct sun.”

As well as País, Bouchon Family Wines have been planting new vineyards of some of the other old vines of the region — notably Carignan, Monastrell and Garnacha. The winery is making a clear statement towards the greater potential for Mediterranean varieties in the warm, dry climate of Maule, having significantly pulled back from its – previously dominant – red Bordeaux varieties.

Sepúlveda is confident that País is not only a variety that reflects the past of Chile but also the future. Along with Julio Bouchon, fourth generation vigneron of Bouchon Family Wines, they have been delving into the DNA of País and collaborating with producers of this variety all over South America and also the Canaries. In 2018, Bouchon organised a País seminar in Santiago, bringing together producers from Chile, Argentina and Tenerife, and in 2023 they plan to expand it to include producers from Bolivia and Peru as well.

Could these infant vines of País offer a new chapter for Chile’s oldest variety? Sepúlveda hopes so: “The reason we decided to plant País again from scratch is because we really believe in its future.”