Find out what makes the ultimate Malbec

At a masterclass organised by db in London on Monday this week, Doña Paula’s director of viticulture and winemaking, Martin Kaiser told attendees what makes the ‘ultimate Malbec’. 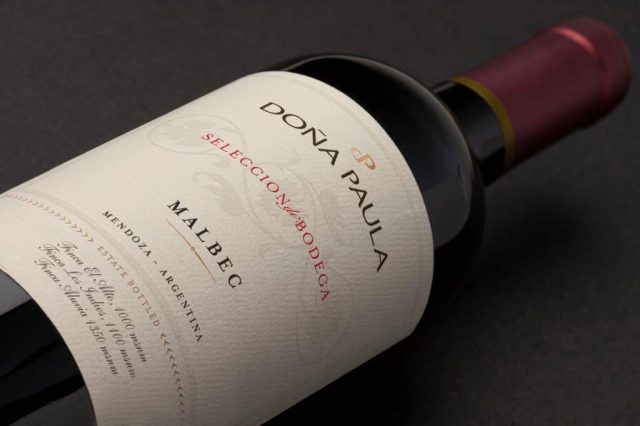 Taking those present at the event through the steps to creating the Selección de Bodega Malbec, which is Doña Paula’s top expression – and celebrating its 20th vintage with the 2019 release this year – he outlined the measures made to hone this wine’s style and quality since it was first produced using the fruits of the 1999 harvest.

Although the Selección de Bodega has a relatively long history for a fine Argentine Malbec, it is since Martin joined Doña Paula in 2006 that many of the major changes to this wine were made.

In particular, he has gradually shifted the sourcing of the grapes from Luján de Cuyo – a warm area near the city of Mendoza – to the cooler Gualtallary, high up in the foothills of the Andes, meaning that today, the 2019 vintage release is entirely from this area, at more than 1,300m above sea level in the Uco Valley.

Not only that, but Selección de Bodega is now a single vineyard wine, hailing from a site called Finca Alluvia, which Martin planted in 2007, having seen its potential for producing outstanding grapes from Malbec, due to its high altitude (1,350m), ensuring that daytime temperatures never get too high, while the nights are cool, and the rainfall low, at around 280mm annually.

In particular, the site has proven great due to its rocky, alluvial soils, with, crucially, a high content of Calcium carbonate, termed caliche in Argentina. Formerly a riverbed, the soils are free-draining, and Martin has trained some of the Malbec in a bush vine form, rather than employing trellising, which is the more conventional approach, and used elsewhere on the property.

Within this site, he has studied closely the make-up of the soils by passing electromagnetic waves through the ground to create maps that can be used to show the water holding capacity of the plots, which he said varies eight-fold – with some areas retaining 200mm of water, others just 25mm.

Such differences are important, as they affect the rate of berry ripening, while Martin has augmented his findings from testing the soil electroconductivity with soil pits, digging as many as seven holes per hectare to find out more about the nature of the Alluvia site, as well as others across Dona Paula’s 700-hectare estate.

Affecting the nature of the Malbec is not only the levels of water stress ­– which will influence ripening rates and tannin quality if it’s excessive – but also the Calcium carbonate content in the soil: where it’s low, the wines tend to be “soft and easy to enjoy”, but where it’s higher, “they can be tight and closed, with more challenging tannins, but with time they start to grow” – favourable traits for great, long-lived expressions.

Such conclusions Martin has been able to draw during a decade of micro-vinifications from each plot, numbering almost 1000 today, giving him a sense of what different areas provide in terms of wine style both immediately, and with time in bottle.

His experimentation extends of course to the cellar too, where Martin has altered maceration techniques to yield finer tannins (with five weeks the maximum time the wine now spends on the skins), while reducing the new French oak content in the barrel-ageing regime by half over the past 10 years, taking it down from 100% to 50% for the 2019 release.

“Malbec has plenty of tannins, giving a natural structure to the wines, but if you have too much tannin from the barrels too, then it can become tiring to drink,” he said.

Currently, his challenge concerns managing the vineyards, as he looks to find a better balance between physiological and phenolic ripeness in the berries, and, in the longer term, how he’ll manage the sites when water becomes scarcer.

Speaking about the former, he says that he’s changing the canopy management to find a better balance between the leaf surface area and the number of bunches. If there are too many leaves compared to the amount of fruit, there’s a danger of sugar levels getting too high before the skins and seeds of the Malbec are fully ripe. But with slightly higher yields, he can harvest a bit later, ensuring the phenolics are fully ripe, but the sugar levels aren’t too great – which would result in excessive levels of alcohol. “A higher yield is improving quality, not diluting it,” he assured the attendees.

As for rainfall, of course he has no control over this , and he’s concerned for the future, as he needs winter precipitation in the Andes for irrigation water in the summer.

“We have always been in the desert, but we have new challenges: it is snowing less in the Andes,” he said. In contrast, he added, “It is raining more in the summer, which is not good, we don’t want rain during the ripening period.”

In other words, Martin is looking ahead to a time where precipitation is coming at the wrong time: not as snow during the winter, but rain during the summer, potentially leading to problems with fungal diseases, and less meltwater for irrigation.

For now, however, Martin has found his “ultimate Malbec” through a decade of experimentation in the cellar and detailed studying of the soil, and the source of it is a bush-trained Malbec from a rocky site, rich in Calcium carbonate, situated at altitude of 1,350 m in the Uco Valley.

The 20th anniversary release is an enticing and mouth-watering wine, with concentrated black fruits, tight-grained fine and dry tannins, and a bright acidity, complemented by a touch of toasty oak from French barriques. It’s a Malbec of intensity, but not sweetness, and structure, but not coarseness. An impressive drop, that’s delicious now, but with a long future ahead of it.

It’s also a Malbec that proves the fine wine possibilities of this grape when grown high up in Argentina, where the Andean influence ensures the nights are cool and the soils are rocky, with, in rare cases, deposits of Calcium carbonate to bring additional texture and character to the resulting wines.

The ultimate Malbec: a summary

The site: Selección de Bodega is made from bush- and VSP-trained Malbec from Gualtallary, specifically from a place called Finca Alluvia, which is located at 1,350m above the sea level – the highest altitude of the Doña Paula estate. The vineyard is notable for its poor, rocky soils with a high content of caliche (Calcium carbonate).

The winemaking: The grapes for Selección de Bodega are harvested by hand in plastic boxes with a 20-kilos capacity from the end of March until the beginning of April. The wine spends a total of five weeks in contact with its skins, starting with a pre-fermentation cold soak. The alcoholic fermentation is made with native yeasts at low temperatures. The ageing takes place in 50% new French oak barrels for 20 months.

Taste the ultimate Malbec in London