Former Selosse and Taittinger winemaker Julian Gout has been appointed cellar master at Champagne Ayala, and will take up the position on 1 November. 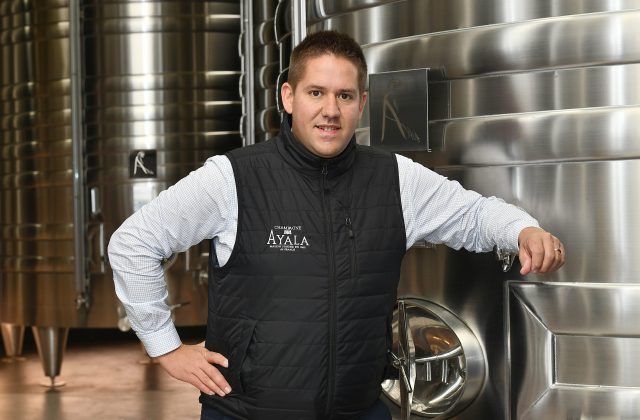 Gout, aged 33, was born in the Vallée de la Marne and comes from a family of winegrowers. After working at Selosse and Champagne Taittinger, he was in charge of the winemaking at Henri Giraud in Aÿ and then operations manager at JL Vergnon in Le Mesnil-sur-Oger.

In 2018, he joined Champagne Ayala as deputy cellar master, where he was put in charge of oenology and the 20 hectares of vineyards owned by the house.

Over the past 4 years, Gout has immersed himself in the winemaking style of Champagne Ayala, and will now take up the position of cellar master at the producer, which is owned by Bollinger.

Gout replaces Caroline Latrive (pictured below), who was formerly chef de cave at Ayala, but left the producer last month to take up a position as cellar master at Champagne Deutz, where she will succeed this producer’s longstanding chef de cave, Michel Davesne, who is retiring in a few months’ time, having been with the maison since 2003.

Commenting on Gout’s rise to a more senior role at Ayala, managing director of the Champagne house, Hadrien Mouflard, said: “Julian’s internal promotion was a natural move; I have full confidence in his leadership and his ability to continue the quality of work undertaken over the last 10 years to further our ambition of embodying Chardonnay’s excellence and expertise in Champagne.”

Gout was described by Ayala as part of “the young generation of environmentally focused Champagne makers who are helping to shape the Champagne region of tomorrow”, with the producer also noting that he is “committed to pursuing the Champagne house’s CSR policy, especially in their aim to become organic.”