US Bourbon brand Kentucky Owl has teamed up with Nagahama Distillery to create a blend that merges the best of both whisky-making nations. 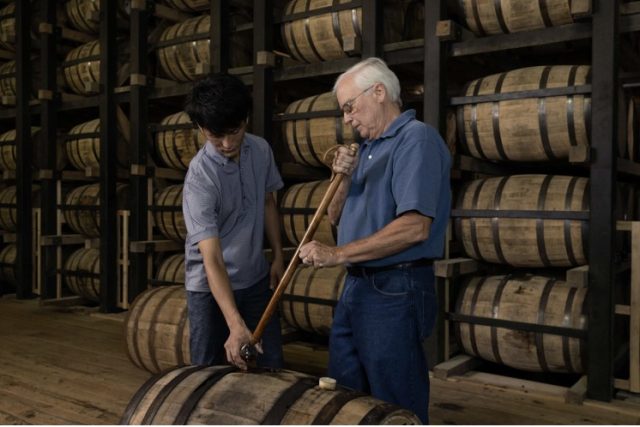 Two master blenders from different corners of the world have come together to see whether they could create a Bourbon “seen through the eyes of Japanese whisky”.

The culmination mixes Bourbon ingredients with a Japanese whisky-making style to produce a mash-up of two great whisk(e)y making countries.

John Rhea of Kentucky Owl, owned by Stoli Group, and Yusuke Yahisa of Japan’s Nagahama Distillery worked together on the project from their their respective countries to produce the resulting Takumi Edition blend.

First, Rhea selected four different samples representing different ages and mash bills containing corn, rye or wheat, and malted barley. These were sent to Japan for Yahisa to taste and evaluate, before selecting a blend he felt was most representative of the Japanese whisky style.

Nagahama is located on the shores of Lake Biwa, Japan’s largest freshwater lake, and produces single malt whisky. However, there is no Japanese whisky present in the Takumi Edition blend. The Japanese influence comes from the techniques and styles used in the whisky-making process.

“The Takumi Edition provides Bourbon lovers with insight into the flavour profiles sought after by a Japanese whisky blender,” said Rhea, who peviously served as Four Roses chief operating officer and was chair of the Kentucky Distillers’ Association. “As someone who has worked in the industry for several decades now, it was exciting for me to work with a rising star in whisky with a unique perspective.”

According to Rhea, the whiskey’s nose features light rye bread, caramel, and a hint of fruit. On the palate, there is an initial wave of rye bread with a full-bodied mouthfeel and long finish.

The Kentucky Owl Takumi Edition Bourbon Whiskey was bottled at 50% ABV, and will retail for US$150 across the US, from October.