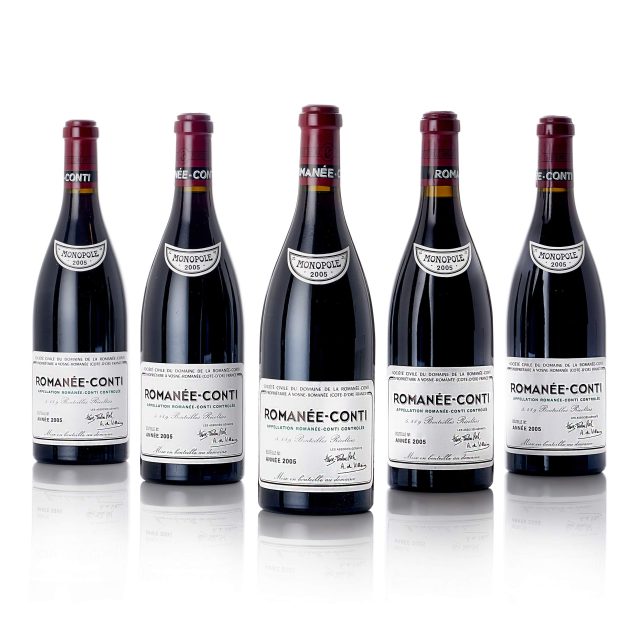 Sotheby’s will hold five sales of wines and spirits in Hong Kong this autumn across three days (2-4 October).

The season’s offering will be led by two single-owner collections; The Pristine Modern Cellar and Magnificent Bordeaux from the Cellar of Sir Dickson Poon.

Comprising more than 2,200 lots, the five sales carry a combined pre-sale estimate in the region of HK$120 million.

Jamie Ritchie, worldwide chairman, Sotheby’s Wine, said: “Our autumn sales season is distinguished by two unmissable single-owner collections that complement each other perfectly: the very finest Bordeaux, in enviable depth, and one of the best collections of top Burgundies to come to market in recent years – both with exceptional provenance and in optimum condition.”

The Pristine Modern Cellar will open the series of sales on 2 October. The Burgundy focused sale will comprise 70% of lots from this highly sought-after region, supplemented by the classic structure of the great Châteaux of Bordeaux.

The whole range of DRC will be represented in strength, together with the Rousseau and Vogüé Musigny. Amongst the Bordeaux First Growths are some of the fine wine connoisseurs’ favourites, including Haut Brion, Léoville Lascases, Cheval Blanc, Ausone, Petrus, Lafleur, and Yquem.

The trio of Guigal’s Côte Rôtie treasures, followed by the grandest wines from Tuscany and Piedmont, are also on offer in this sale.

Followed by the private cellar sale from Sir Dickson Poon on 3 October, the sale is the second assemblage of wine from the renowned collector.

“Those who have been fortunate enough to know Sir Dickson would also know his great love of wine, as he is a true oenophile with impeccable and discerning tastes. This passion is evident in each and every bottle from his cellar, which together form one of the most impressive collections of Bordeaux in the world,” said Patti Wong, chairman of Sotheby’s Asia.

Lafite, Latour, Haut Brion and Cheval Blanc lead the way in the sale, with Cos d’Estournel, Troplong Mondot and Beauséjour Duffau vying for attention. The collection also pays homage to the phenomenal line-up of Petrus, across six decades. California has always featured in the cellar of this collector, with favourites being the Bryant Family Vineyard Cabernet Sauvignon, Joseph Phelps Insignia, Peter Michael Cabernet Sauvignon Au Paradis and Christian Moueix’s Dominus, featuring the aromatic 2003 vintage. Some hidden gems, such as the remarkable Romano Dal Forno’s Amarone della Valpolicella, in the collection are also not to be missed.

Paul Wong, Director, Asia, head of department, Wine & Spirits Auction, said: “We are absolutely thrilled to have been entrusted with the second installment of Sir Dickson Poon’s superb wine collection, following the success of the first sale just over two years ago. Once again, it charts the best of the best from the Bordeaux region, with landmark vintages from top-tier Châteaux, including Lafite, Latour and Haut Brion. The wines in this sale were produced to the same exacting standards and discipline that Sir Dickson applied to his passion for wine collecting.”

On 4 October, the auction will hold two sales that feature 500 lots of international fine wines with an estimation of HK$21 million.

The exclusive Primum Familae Vini Case & Passport will make its debut in Sotheby’s wine Asia in this sale, representing 12 of the finest vintages produced by some of the world’s best wine-producing families from France, Germany, Italy, Portugal and Spain. In the afternoon, a rare spirits focus sale will be put up with lots including: a full set of 36 bottles of Karuizawa depicting Katsushika Hokusai’s 36 views of Mount Fuji; Karuizawa 50 Year Old Aqua of Life, and the Karuizawa Pearl & Gold Geisha Set; Brora Limited Edition 40 Year Old Cask Strength; Port Ellen 40 Year Old Casks Of Distinction 1979 and Kweichow Moutai spanning four decades.