Small Beer launches on cask for the first time 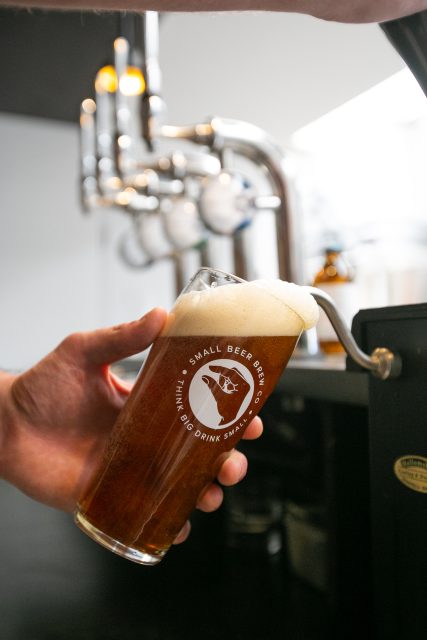 The decision to launch in cask format comes at a time when keg and packaged beer is outstripping sales of cask beer in pubs. However, cask ale – sometimes referred to as real ale – can only be obtained from a pub setting as it undergoes its final stage of fermentation in the pub cellars prior to being served at the bar. The launch is, as such, a genial nod to British traditions and a way of supporting the pub industry during a challenging time.

Small Beer founder and head of sales James Grundy said: “There’s something quite magic about cask beer. It requires a lot of care and attention from the brewer, the distributor and the publican, but when this happens, there’s nothing quite like it.”

According to data from the Society of Independent Brewers (SIBA) cask beer numbers failed to recover after Coronavirus restrictions were lifted and has long been in decline, despite efforts from the Campaign for Real Ale (CAMRA) and Cask Marque.

Before the pandemic, cask ale accounted for 67% of the beer produced by SIBA breweries, however, numbers from 2021 show that this fell to 46%.

Small Beer co-founder and head brewer Felix James explained: “There’s no doubt that keg beers are in high demand, but as a brewery that takes great pride in sourcing the best quality malt and hops from British farmers, we feel a social responsibility to champion cask beer for a new generation of craft beer drinkers to enjoy.”

Small Beer, which takes its name from a historic type of beer that was consumed by the British public before clean drinking water became widely available, is no stranger to upholding British brewing history.

Grundy added: “Small beer was the original session beer: it stems from Shakespeare’s heyday when it was a staple of everyday British life. The ambition for our brewery was to reinvigorate the lost art of crafting beers that nourish and hydrate. All of our beers are brewed under 2.8%, which is perfect for modern drinkers who live fast-paced lifestyles.”

Small Beer Steam is set to be sustainably brewed in Bermondsey and hand-filled in the brewery. Casks are going out to pubs across the country, including two historic London pubs: The King’s Arms on Roupell Street and The Roebuck on Dover Street.

Small Beer Steam will also be available to drink at the Small Beer Taproom.