At the top end of the market sits the most expensive spirits. But do their often heady prices offer good value for money? Judging by the results of our Luxury Masters Asia competition, the answer is a resounding yes, says Alice Liang. 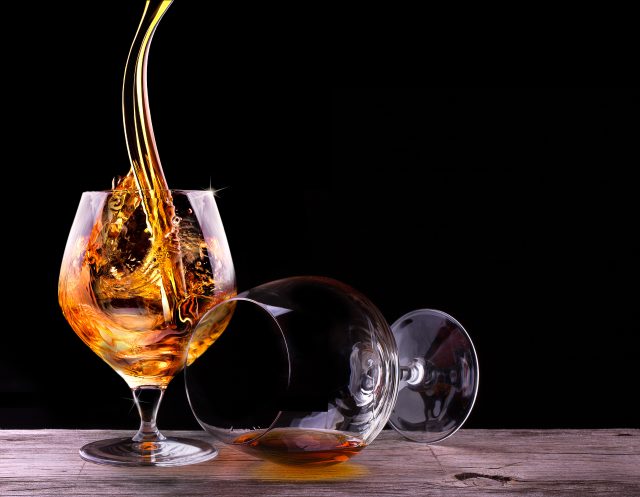 The Asia edition of our Luxury Masters competition showcases the creative ways in which producers are pushing the boundaries of top-level spirits production.

The high-end expressions were judged by an expert panel including: Alice Liang, managing editor of the drinks business Asia; Alex Ko, beverage manager of Tastings Group, which has a series of bars and restaurants in Hong Kong; and Manuel Arce, spirits director of Hong Kong spirits-branding firm Nimbility.

The competition kicked off with the vodka section, and a Silver medal went to Royal Mash for its eponymous bottling.

Australian producer Archie Rose was undoubtedly the top performer of the competition overall, netting results in categories including gin, rum, and world whisky. The spirit producer attained the Masters accolade in both the gin and world whisky category.

In the gin segment, Archie Rose entered five expressions, and its Bone Dry Gin took home the Master medal. Ko said: “This captures a whole spectrum of classic gin flavours, with nice citrus and cassis as well as liquorice notes. I can tell that it is made using an old-school method, yet it strikes a good balance, showing great intensity.”

He also highly rated Distiller’s Strength Gin, the overproof gin from the same distillery. Ko commented: “Showing aromas of juniper and pepper, its finish is smooth like satin; very delicate. This is a fantastic gin for making a Martini with.”

The Distiller’s Strength Gin was awarded a Gold Medal; other Gold winners for this category include Kinsale Gin, and Highclere Castle Gin.

Irish whiskey is becoming increasingly popular worldwide, and that was reflected in two solid Silver medals for Kinsale Spirit. The first was awarded to its Spanish Earl bottling in the Single Malt/Single Grain/Single Pot Still – Super-Premium category, while Red Earl took a second Silver medal in the Blended – Super-Premium round.

Moving on to the world whisky category, and Archie Rose captivated the panel once again with its four expressions. The brand’s Single Malt Whisky was awarded a Master medal – it offers amazing value for its price (under HK$650). Arce said: “This Scotch-style whisky offers real taste on the palate, with sweet flavours such as redfruit, marshmallow, and nougat. This could serve as a sipping whisky, and it’s at a good price point.”

Moving up the price ladder, the distillery also received two Golds for its Good(e) Whisk(e)y, and Single Paddock Whisky Harvest 2018. The former, a blend of Single Malt and Rye Malt Whisky, is priced under HK$700; while the latter, which carries a slightly more expensive price tag of HK$1,320, is the distillery’s first vintage whisky.

American whisky was another competitive category in this year’s competition, with Uncle Nearest Master Blend Edition (Batch 012) being bestowed with a Masters medal. Arce said the whisky, which carries a price tag of around HK$1,000, “justifies the price as it gives a well-balanced profile. On the palate, it is highly concentrated, smooth, rich and elegant – it can easily stand out from the crowd.”

The liquid is aged for 24 months in teak barrels, and Arce found it boasted “notes of aromatic honey and capsicum”, as well as being “big on the palate, with an unusual intensity and a balanced body”.

The Lost Explorer Mezcal Company also drew the attention of the panel through the quality of its The Lost Tobala 10. Both this and its Salmiana 12 were recognised with Gold medals.

“The former has an interesting transition from sappy clean to clay mineral palate,” said Ko. “I can identify flavours such as green bell pepper, and intense smokiness. It has fantastic complexity with both fruity and savoury characters.”

Ko added: “The latter is very complex but extremely well balanced and delicate. I got notes of yellow bell pepper, pineapple, and a certain meatiness.”

Last but not least, Ko praised the Sazerac de Forge & Fils Finest Original Cognac, which is a blend made from a number of old native grape varieties.

He said: “As an XO priced at under HK$1,000, it gives excellent value for money, with layers of white grapes and orange blossom, and finished with spices such as black pepper.”

Please find the full list of medal winners below: 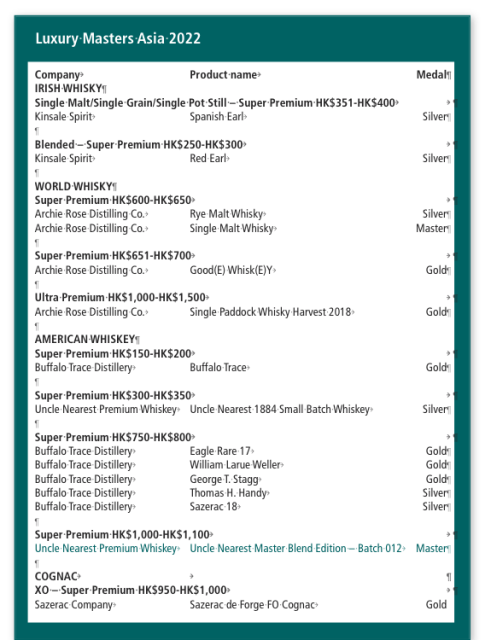 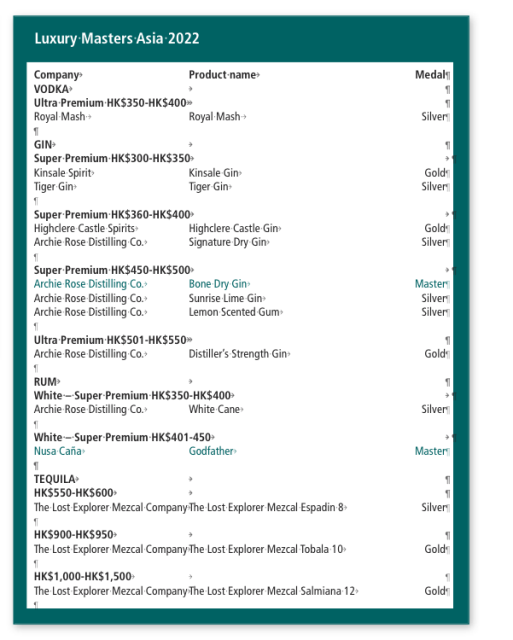