Farrer Horse, in The Sultan Hotel, serves equestrian-inspired cocktails in a setting that evokes the spirit of Singapore’s once-famous Farrer Park racecourse. 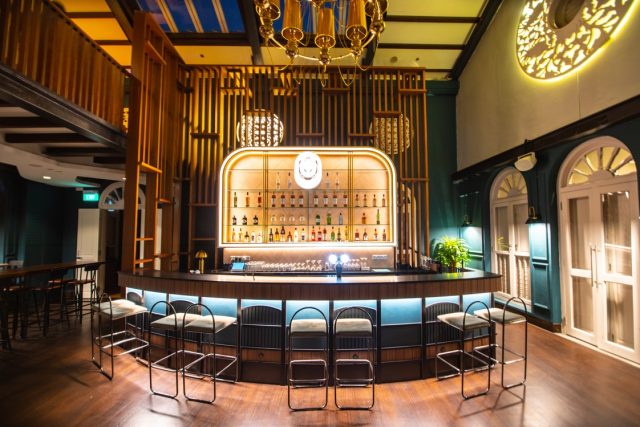 Farrer Park Field, which was founded in the 1840s, was the place to be in the 1920s and 30s, but today the site is reportedly being redeveloped for residential use. The new “gastro-cocktail concept” in The Sultan Hotel, devised by Ayyakannu Srinivasan, the second-generation owner of Muthu’s Curry, and his wife, Malarvizhi, aims to recapture and preserve some of what has been lost over the decades. The green and tangerine interior was chosen to represent the turf course and terracotta roofs of colonial-era buildings.

The bar at the aptly-named Stable will be serving up a range of drinks sure to put a spring in your step (or at least raise your trot to a canter). Among the concoctions devised by The Compound Collective, and named after famous race horses, is Secretariat, inspired by the Mint Julep’s of the Kentucky Derby but with a hay-infused bourbon. Also in the running is Kelso, which includes Japanese barley shochu as another playful nod to the diet of a thoroughbred.

Diners will be pleased to know that the extensive menu means that they will, indeed, be able to eat like a horse. The food served in the first-floor dining room is inspired by Singapore’s multiculturalism. Poppadoms, otah ravioli (a southeast Asian fishcake made of mackerel and prawns) and ‘salad & tea’ (a riff on Burmese salad laphet) all feature. As for dessert, there is a classic vanilla bean panna cotta.