Harvest in Champagne nears completion for 2022

The Champagne harvest is coming towards the end after nearly two weeks of concentrated picking. With earliest official dates in the Aube department, where crus like Polisot could start the harvest on Monday 22 August, it was in full swing by the middle of last week (31 August) and most villages and plots will be completed this weekend (10-11 September) or early next week. 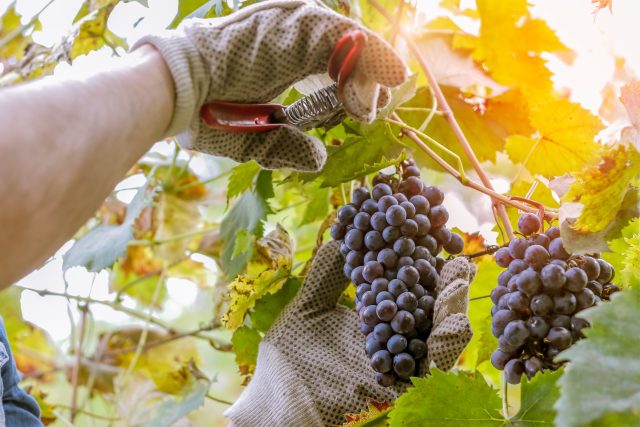 The Champagne Comité was already predicting “quantity and quality” when the Matu network began monitoring the final days of ripening from 8 August, with the grapes said to be in “perfect sanitary condition” and less than 10% of the vineyard potential lost to early spring frosts. At the start of this week (5 September) the Comité was estimating an average agronomic yield of around 14,500kgs/ha, but already conceding that some will barely reach the maximum usable yield of 12,000kgs/ha, though others, including some in the Côte des Blancs, were estimating more than 20,000kgs/ha in their vineyards.

Evidence that yields are widely variable is coming in from producers, although generally they are far better (higher) than in 2021, which is good news as (DB has reported) the Comité has set out to help everyone rebuild their stocks, with the maximum usable yield set at 12,000kgs/ha, but the possibility of putting a further 3,500kgs/ha into the reserve, thus allowing up to 15,500kgs/ha to be picked. (depleted reserves used to bolster the short 2021 harvest, mean the average level of the reserve fell to 4,496kgs/ha immediately prior to the 2002 harvest.)

The volume that could be put into the reserve was extended by a further (unprecedented) 1,000kgs/ha in late August (23rd) just as picking began, making the potential maximum that could be harvested 16,500kgs/ha. This was a result of the Syndicat des vignerons de la Champagne (SGV) President Maxime Toubart putting in a request to INAO, as it can through the role it plays in the Organisation de défense et de gestion de l’appellation (ODG). INAO accepted the request, understanding the desire of the growers and houses to replenish depleted stocks as soon as possible, making the temporary modification to the appellation rules (Cahier des charges) to allow this, in view of the quality of the crop.

Speaking to Jean-Hervé Chiquet of Champagne Jacquesson yesterday (7/9) he told the drinks business that “while the figures are still estimates as we will not finish picking in Dizy, Aÿ and Hautvillers before next Monday or Tuesday, and in Avize/Oiry a couple of days later, we expect something like 11,000 kgs/ha in Grande Vallée de la Marne and maybe 14,000 kgs/ha in Côte des Blancs. Excellent yields without excess.

“The quality looks perfect, average potential alcohol is around 11.5deg° so far, with a low at 10.7deg° and a high at 12.5deg° and the health; well this is why it’s an “exceptional harvest. Fortunately, we quite often have grapes in perfect health, but I have never seen 100% of the grapes in 100% of the cases, in perfect health, before this year.”

Alice Paillard at Bruno Paillard is also very happy about the quality in their estate. “All in all, it is looking great, homogenous quality at harvest and rather abundant yield. We should most definitely make the appellation [12,000kgs/ha] and be able to replenish our reserve. It is interesting to point out though that the chardonnay suffered a little more from the dry conditions than the black grapes and yield and average bunch weight is a little lower for the white.”

They started picking in plots of old vines in the Côte des Blancs (thorough the process of derogation) on 27 August, with Les Riceys opening for them on 29 August, where their Pinot vineyards, “spared from any frost or hail, needed time to reach perfect maturity. The harvest there carried on slowly and was completed that week (29 August-2 September) with exceptional quality,” says Paillard.

Pinot Noir in the Montaigne de Reims began on 4 September “and we are hoping to finish this Friday 9 September) with the Meunier from Mareuil-le-port and Festigny on the left bank of the Marne river”.

Philippe Brun of Champagne Roger Brun in Aÿ, who operates one of two independent presses in this village says: “Not everyone will reach the quantity they are allowed to pick. My vineyards are managed to target 12,000 kgs/ha, so I won’t pick extra to rebuild my reserve this year, but I wasn’t very damaged last year (2021). The vineyards suffered from the drought and the weight of bunches was lower than expected and with less juice, it was hard to get the volume.”

Olivier Bonville of Franck Bonville based in Avize describes an early, mid-slope plot where the potential alcohol was 11.3deg° as “Very beautiful. The sugar is there, the fruit too and the clusters are superb, even if the berries are small. We won’t have the yields we were expecting. I don’t think we’ll exceed 14,000 kg/ha, while the maximum yield for 2022 is 16,500 kg.”

Michel Davesne at Deutz, now working with Caroline Latrive, who is due to take over as chef de cave when he retires, describes it as an exceptional harvest. With 12° of potential alcohol, it’s ripe. But you have to look for high degrees to reach the fruitiness and therefore it was necessary to wait a little longer for the fruit to express itself.”

Alexandre Chartogne based in the village of Merfy just to the north-west of Reims, revealed that he picked Pinot Noir at around 13deg° in a parcel he farms in Bouzy, where he makes Côteaux Champenois. By this weekend, he expects to finish picking his remaining plots in Avize and in his own village in the Saint Thierry area, where he reports both the volume and quality look good,. He’s particularly excited about the quality of the ungrafted Meunier he has in Merfy that he began harvesting from 1 September.

Louis Roederer’s Jean-Baptiste Lécaillon reports a potential alcohol reading of 13.6deg° in the Les Volibarts vineyard in Le Mesnil-sur-Oger where they produce the white Coteaux ChampenoisHomage à Camille. He described the first week of picking as “just perfect under clear and sunny weather with cool nights. As expected, malic acid is very low thanks to the sunny weather, but this is ideal for our non-malolactic style of champagne.” He referenced the famous sunny 1959 harvest as an apt comparison in the first few days of picking.