Delamain Cognac: a study of a boutique Cognac house

Some superficial similarities exist between Cognac and Champagne – both have legally delimited zones of production, and both industries are split between major houses on the one hand, and growers on the other. Drill down into the detail, however, and differences emerge. 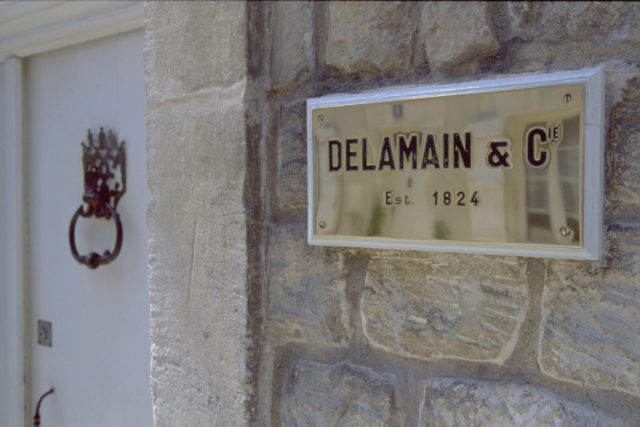 Cognac has close to 80,000 hectares of vineyard – more than double that of Champagne – cultivated by some 4,000 growers, versus about 15,000 in Champagne. Twenty years ago, there were 8,000 vignerons in Cognac, illustrating a growing professionalism as small landowners exit the industry.

That picture of consolidation extends to brand owners, with Cognac’s “big four” – Hennessy, Martell, Rémy Martin and Courvoisier – accounting for more than 80% of global consumption. That leaves little space for smaller operations, but a number of boutique houses still carve out a niche for themselves, pitching their artisanal credentials against the might of that dominant quartet.

Most growers sell the vast majority of their production to big houses, but many still bottle their own Cognac as well. The best of these are the hidden gems of the region – growers such as Château Montifaud, Jean Fillioux and Michel Forgeron, or David Baker’s Hermitage Cognacs – an independent bottler focused on the highest quality.

In the middle sit a number of houses that may lack the scale of the big four, but still have an international reputation and profile. From Hine’s vinous style to Frapin’s field-to-glass approach; from Camus’ exploration of terroir to Maison Ferrand’s experiments with casks and grape varieties. 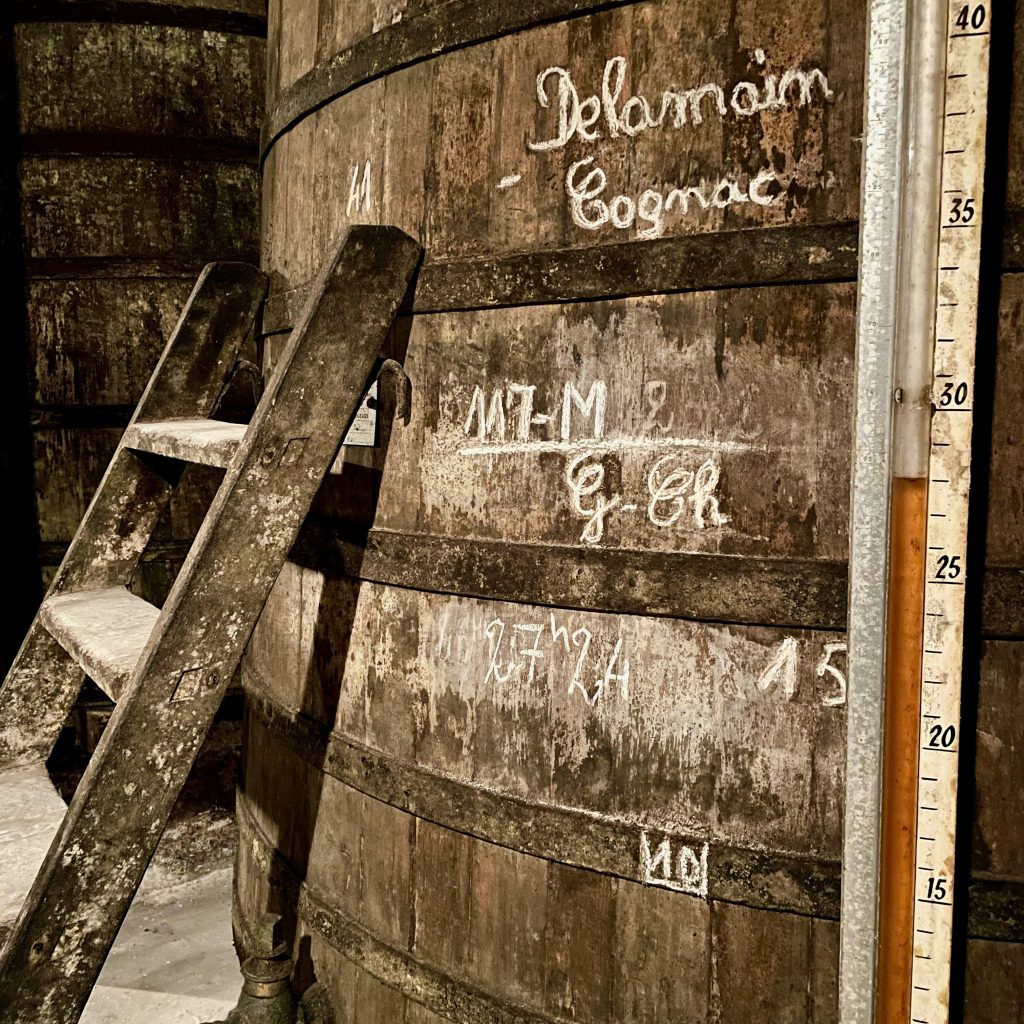 The specialism of Delamain, in which Groupe Bollinger has held a majority stake since 2017, is high-end Cognacs, and a style that favours expression of terroir over excessive oak influence. Where Hennessy shifts a phenomenal 100m bottles of Cognac a year, Delamain sells about 100,000 – but then the house’s “entry level” is its Pale & Dry XO. In terms of scale and focus, this is a very different operation.

Pale & Dry, which accounts for about 80% of Delamain’s sales, sums up the ethos of the house. Brothers Jacques and Robert Delamain created it in 1920 when they returned from the First World War, explains Charles Braastad, Delamain MD and the ninth generation of the family to run the house.

“They had this idea of having a Cognac that was different from that time,” he says. “They wanted to show what the vineyard could bring without [adding] sugar or caramel.” Pale & Dry became an XO during the 1990s and was relaunched on its centenary in 2020, with a new, higher-strength blend and fresh packaging.

There’s an air of permanence about Delamain’s Jarnac headquarters, from the peaceful dark of the cellars – one of them in a 13th-century crypt – to the presence of Dominique Touteau, a 42-year company veteran who has been cellar master for three decades. But the new Pale & Dry isn’t the only recent change at Delamain.

In 2019, the company returned to running a vineyard for the first time in over a century, taking over the management of a 21-hectare lieu-dit called La Rambaudie, on the border of Malaville and Bonneuil, in the heart of Grande Champagne.

“We also purchased a number of casks from the grower,” says Braastad. “It was like having the DNA of the Cognac and the property. We could track 40 years in advance what we could expect from the vineyard. It’s fantastic to have that visibility on the past.”

La Rambaudie is the source of one of the Cognacs that form this year’s Pléiades collection from Delamain. This limited-edition, rolling series of single cask Cognacs – sourced from a single harvest or a single vineyard – is now in its third year and is split into three in ascending order of age: 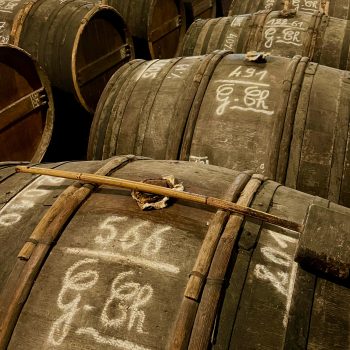 The emphasis is squarely on provenance, from the transparency about the source of the eaux-de-vie to the information-rich front label.

At the upper end of this year’s releases, Mr Dauge’s Testimony is a remarkable Cognac acquired from an octogenarian grower based at Bourg-Charente, on the left bank of the Charente River. Distilled in 1969 in a tiny still, it spent most of its life in Mr Dauge’s humid cellars, moving into progressively smaller casks and then into glass dames-jeannes.

In contrast to the compelling back-story attached to Mr Dauge’s Testimony, another of this year’s releases, Ancestral, is rather more elusive. Braastad knows that Delamain bought the 350-litre Tronçais oak cask 40-50 years ago, and that it’s roughly 60 years old – but that’s about it. Here he has to let the Cognac speak for itself.

Unearthing gems like Ancestral or Mr Dauge’s Testimony isn’t easy, particularly in today’s highly competitive market. “These Cognacs are really rare,” says Braastad. “We have some in our cellars, but it’s not like growers are coming to us every day to offer us that quality.”

Nor is every old eau-de-vie a great eau-de-vie. “Some Cognacs grow old because they were not used in a blend, simply because something about them wasn’t quite right,” says Braastad. These wallflower casks just get older and older – leading to some difficult conversations with growers.

“People get very attached,” explains Braastad. “They come to us saying: ‘M Touteau, we are ready to sell this Cognac, which we have kept for generations.’ We have to call them back and explain that it’s not quite our style. Age doesn’t always bring quality.”

Maturing, bottling and releasing Cognacs of this type is painstaking and time-consuming – it takes months to reduce alcoholic strength prior to bottling using a 15% ABV blend of the same Cognac called les faibles – and the old casks that Delamain likes to work with are proving harder to find.

Still, Braastad appears content with Delamain’s position: sourcing from Grande Champagne, where the spongy chalk soils help vines to thrive even in a hot, dry year like 2022, and enjoying a reputation for quality that means growers feel a sense of pride in supplying the house – “It’s about price and the relationship,” he says.

Braastad is also aware that, in today’s sometimes cut-throat market, Delamain is better off than some of its rivals. “Now prices are high because there is demand,” he says. “It’s becoming harder and harder to find young Cognac at the moment.

“To make VSOP is a nightmare, and for small houses making VSOP, it’s very, very tough.”