After fresh outrage and backlash over wines featuring images of Adolf Hitler being sold in Italian supermarkets, the Italian winemaker behind the range has announced that it plans to discontinue the line next year. 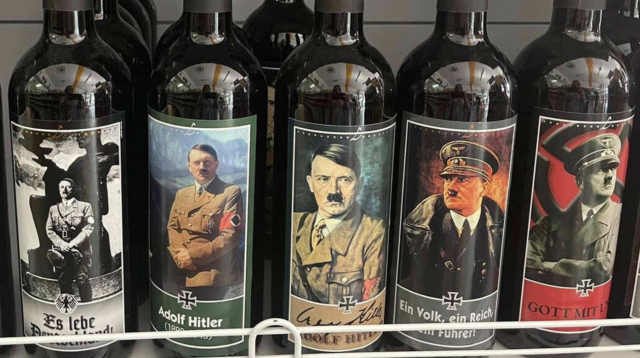 Vini Lunardelli has been selling its range of ‘historical’ wines for some time now, featuring images of dictators including Adolf Hitler, Josef Stalin and Francisco Franco.

The Hitler-themed bottles once again found themselves in the midst of backlash last week, when Austrian doctor Dagmar Millesi told local media she had witnessed people travelling to the resort of Jesolo (near Venice) to buy the bottles from a local supermarket.

“The store employee said Germans very much like to buy these wines, and they are clearly the big hit there,” she said. “The saleswoman was even amused at my outrage . . . nobody is angry about it, no one forbids it . . . I couldn’t believe it.”

The wines also prompted Germany’s Jewish Forum for Democracy and Against Antisemitism to issue the following response to Vice News:

“The marketing strategy is disrespectful to all victims of the Nazi regime and their descendants”.

This is certainly not the first time that concerns have been raised over the wine range. Holocaust foundation the Simon Wiesenthal Center has previously urged people to boycott the wines.

And the German government itself has lodged complaints against the wine, starting way back in 1997.

The wine range, which sees bottle featuring  phrases such as “Mein Führer”, “Sieg Heil” and “Ein Volk, Ein Reich, Ein Führer” alongside images of Hitler on its labels, is reportedly available in more than 50 stores across Italy, where the sale of products featuring facist imagery is mostly legal.

The Vini Lunardelli winery has maintained in the past that the wines are not “political”, rather a method to “remember” history.

“Unfortunately the most requested label [in the “historical” line] is Hitler – especially by Germans, but also by many British, Nordic, French and Russians,” winemaker Andrea Lunardelli told Vice. “But no Italian wants Hitler.”

He said that the winery would discontinue its entire line of ‘historical’ wine labels next year, when he is due to assume control of the winery from his father. Lunardelli told Vice he was sick of the controversy the product has stoked over the years and that he didn’t like the ‘historical’ range anyway.