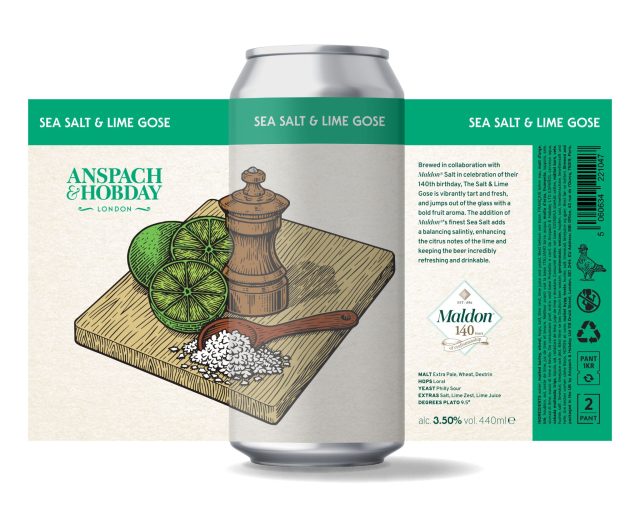 The Sea Salt and Lime Gose is infused with lime zest, lime juice and Maldon’s sea salt. It launches this year to celebrate 140 years of Maldon sea salt, originating from the town of Maldon in Essex.

Simon James, innovation manager at Maldon Salt said of the collaboration: “To celebrate our 140th Birthday, Maldon Salt company are very excited to collaborate with Anspach & Hobday. We wanted to partner with them specifically, as the team appreciate the traditional brewing techniques and styles but embrace modernity and novel ingredients.

“We are delighted to have our sea salt flakes in this Lime Gose to add another level of freshness alongside the bright citrus fruits and floral American Hops.”

Paul Anspach, co-Founder and head of production at Anspach & Hobday, explained that salt adds salinity to beer, and can enhance other flavours within the brew, much like when it is used in food.

“We have always enjoyed using salt in beer – whether in styles where you would typically expect it such as Goses, or in experimental and progressive styles such as chilli & chocolate Stouts.”

He added: “Obviously when one thinks of high quality sea salt only one name comes to mind, and the Maldon salt used in this beer really helps the sharp, citrusy notes of the lime to punch through.”

The brewer has a history of quirky collaborations, the latest of which took the form of the OrWanguTang orange and mandarin Gose made in collaboration with stand-up comedian Phil Wang to raise money for the Orangutan Foundation.

Phil Wang said of the collaboration: “As a son of Sabah, the natural beauty of Borneo and our furry orange friends who call it home have always held a special place in my heart. The Orangutan Foundation has been working for 30 years to protect them and their habitat. I’m thrilled to have my face on a can of lovely beer in support of them.”