Hail travelling across French wine regions for 10 consecutive days in June has damaged 30,000 ha of vines. 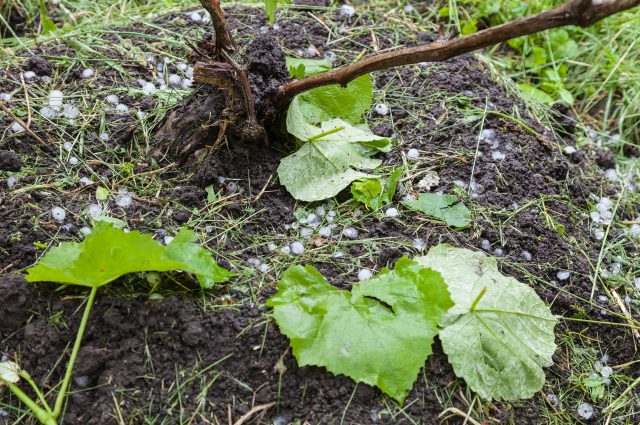 18 June saw the heat wave across France transform into a hail storm, destroying several dozen hectares in the Pessac-Léognan area, according to Vitisphere.

The hail storm then travelled across a number of French wine regions over a ten day period, destroying crops and leaving vineyards severely damaged.

At least 10,000 ha of vines have lost more than 30% of their crop in the Gironde region, according to Philippe Abadie, director of the business department of the Gironde chamber of agriculture.

Following the various episodes of hail, the Gironde Chamber of Agriculture undertook an inventory of the damage suffered as well as the financial needs of the farms, and has re-activated its solidarity fund to intervene quickly to meet an immediate need for recultivation.

The aid covers up to 60% of the costs to farmers, with a ceiling of €5,000, within the limits of the funds available.

The Gironde Chamber of Agriculture created a map estimating the level of damage to Gironde, with a number of areas suffering a crop loss rate above 70%. 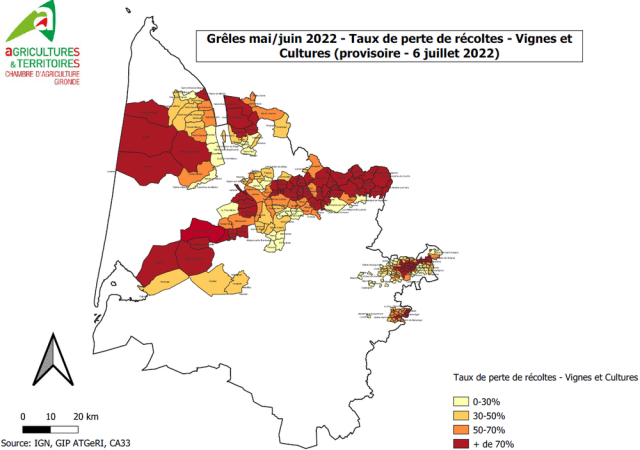 Hail also devastated Cognac, where the marketing board identified damage spanning 170 localities over 13,500 ha. The region lost 15% of its production potential over two days.

Travelling east to Beaujolais, the storm struck the region four times from 21 June. Lot chamber of agriculture expects losses of 30-80% in a 20km radius around two localities.

The Hérault area and Pic-Saint-Loup appellation were hit by the storm on 24 June, followed by Champagne and the Côte des Bar’s one day later, when 250 hectares were damaged to varying degrees.

“In the area around Claret, at the epicentre of the storm, 500 ha of vines were affected, 50% of them with 30% damage, 40% between 30 and 80%, and 10% over 80%”, said the chamber of agriculture, after centralising statements by winegrowers on 1 July, as reported by Vitisphere.