Filippo Bartolotta investigates the wines of Bolgheri, where the Pliocene salty clay is growing wines that are more refined and with a clear terroir character. 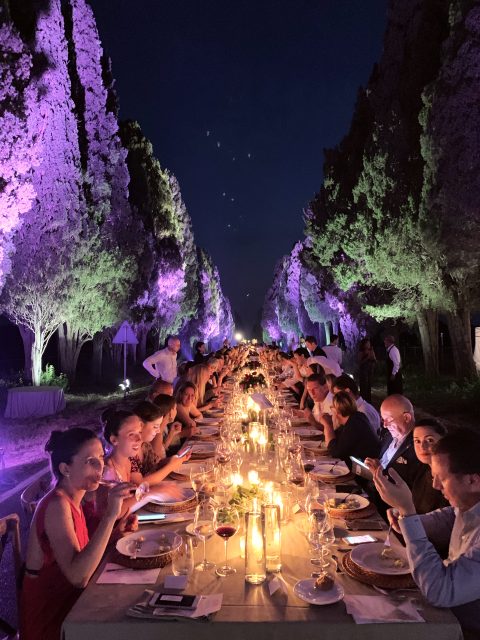 When driving to get to a winery we should always be planning to get there a few hours ahead of schedule. Regardless how many times we have been to a place, the landscape surrounding the winery will always disclose something new and poignant to the character of the wines produced in that given area.

Two weeks I took my yearly trip to Bolgheri in Tuscany, the home of one of the world most talked wines: the Super Tuscans. It was here in 1972 that the first officially bottle of Sassicaia from Tenuta San Guido was released onto the market (from the 1968 vintage) forever changing the Italian wine scene.

The world was shocked by the level of attention this “new” wine received – for example in 1978 Sassicaia was named the best Cabernet in the world at a tasting in London. During the unfolding of the labels of the blind tasting, the winner Sassicaia was found out to be just a table wine – Vino da Tavola. One imagines the journalists looking at each other, feeling a bit guilty they scored a wine with no appellation as a gold medal ahead of any first growth or famous Napa wines! 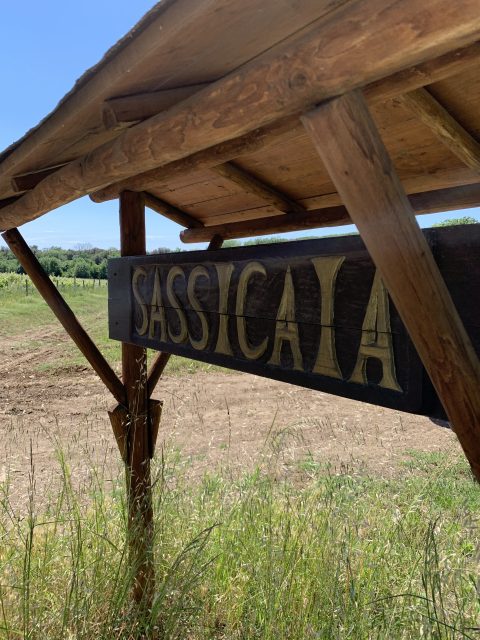 Origins of the Super Tuscans

This is when and why the word Super Tuscan was minted to describe a wine which either doesn’t belong to any appellation or even if it was it would be a rebel not complying to the rules and as a result outcasted from the DOCG into a Vino da Tavola (or today into an IGT). This wines are crafted with a modern approach – ie from international varieties, selected yeasts, temperature controlled fermentation, 225l barriques; inox vats etc –  and then released in the market for a premium. The success of Super Tuscan style wines was enhanced by the Judgment of Paris.

Anyone in the wine trade remembers the revolutionary tasting the beloved Stephen Spurrier organized two years before Sassicaia in 1976 wine the Cabernet completion, the so-called ‘Judgment of Paris’ where Napa wines won against the most famous Bordeaux.

It’s clear that the world’s palate starts to become a touch sweeter and more ‘American’. A few years later the “Robert Parker 100 points Graal” (Sassicaia was the first with the 1985 vintage) would push almost any wine region in the world to catch up with the new trends and Tuscany was one of the first to ride this wave.

Together with this though, some resilient ‘old schoolers’ using more traditional wine process, such as  big Slavonian oak barrels, indigenous varieties, and indigenous yeast, resisted the new trend and are now enjoying a come-back and appreciation by wine critics and wine lovers.

For a good 30 years though it was a bull market for the Super Tuscan-style wines.

And this – whether you are an old or new school wine lover – is what made Italian wineries able to stick their heads out in the international markets with more modern, clean and also international style wines. Lots of wineries emulated Tenuta San Guido and one of the most successful has been the neighbouring Ornellaia, designed, built and created by Marchese Ludovico Antinori only in 1981. 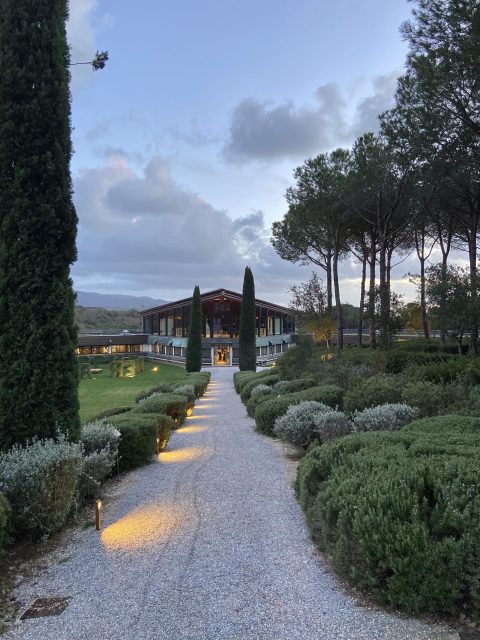 This is where I have my appointment in Bolgheri on the Tyrrhenian coastal area just 150 km from the beautiful Renaissance city of Florence.

The exit of the highway is called La California, a name given to the small town of farmers and fishermen in the mid-1800s by an honorary consul who used to move continuously between the Mediterranean and the US, that land of freedoms and opportunities. However, up until the 70’s the area had virtually no vines at all.

A little over an hour away either from the famous DOCG of Chianti Classico Montalcino and Montepulciano all the way south west but no appellation requirements back in the day: a clean slate, an opportunity to make wine from scratch without following any imposed rules.  It must have felt so empowering to kick off such an adventure!

My two hours ahead of schedule is a good excuse to treat myself for a coffee and a heavenly smelling sfoglia alla mela (an apple pastry) in the local Bar-Pasticceria called Celli. In La California you can already breathe the air of freedom, as everyone is walking the bar with their swim trunks and flip-flops speaking their local slang without caring too much for rules and formalities.

People here seems to be going at a much slower pace, it’s hot, the air is much more humid and the sea breeze is adding an extra layer of perfumes and sapidity to my coffee. This extra flavours I feel in my cup of coffee it would also reach the vines of Bolgheri only a few km from the beach. With their roots sunk in some tough salty clay combined with sand and the huge amount of light this is this place were Super Tuscans, or I should have said, Bolgheri wines are born. 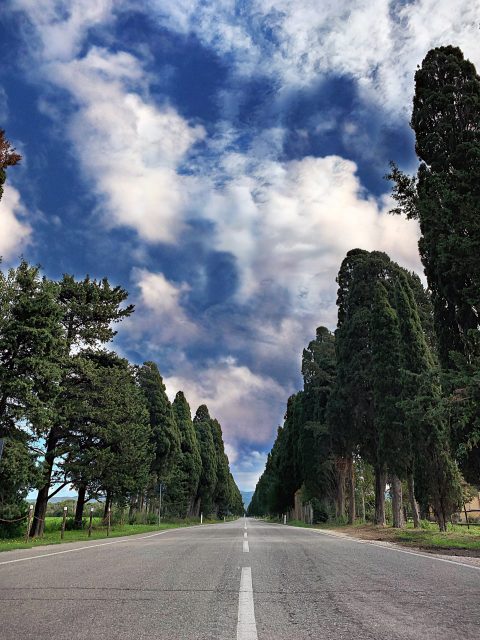 Bolgheri gained DOC status in 1994/1995 meaning that few wines there are classed as Vino da Tavola or IGT (Indicazione Geografica Tipica) – today, a total of 65 wineries own 1,370 hectares of vines of which 1,190 are DOC and only 180 IGT.

The main cultivated variety is Cabernet Sauvignon with over 34%, then it’s Merlot with 22%, Cabernet  Franc with 16% and then some Syrah, Petit Verdot. The king of Tuscany Sangiovese, is only 1.28%. The wines can either be Bolgheri Rosso Superiore with two years of aging of which one in oak and Bolgheri Ross Doc with no ageing requirement usually offering lighter and readier to drink wines.

After almost 30 years of DOC the wineries seem to be prouder and prouder of their results. The Director of the Consorzio of Bolgheri, Riccardo Binda, is a very determined and proud ambassador of the appellation: “the wines are proving to be more refined and with a clear terroir character”, he says.

He isn’t just doing his job or being somebody proud of his origins (he is from Oltrepò Pavese near Pavia) but genuinely convinced the wines are speaking a great sense of place, despite these are all mainly Bordeaux blend.

Bolgheri is a DOC with the highest profitability in Italy around 39/40% thanks to the presence of a large number of private and capitalized companies. Fast but well controlled growth with appropriate investment at any level: agronomical and technical, human resources and real estate.

If on top of this we take into account a very high degree of cultural wine knowledge the results are finally paying back with wines that are less and less varietal and more and more Bolgheri.

Talking varietals, over the years, there’s been an increase of monovarietal wines but in general from a Bolgheri Rosso one should expect a lot of power and intensity, some distinguishing aromas of sweet, ripe dark fruit with Mediterranean herbs, balsamic notes and a savoury long finish. The overall aging potential is pretty good, and among the top guns: my most recent pop of Sassicaia 1985 two years ago showed a still extremely luscious wine; Ornellaia 1998 is one of my favourite of all times (I remember enjoying a lot of it as most people lost the plot for the prior vintage and not focusing in this beauty); Masseto 2006 is still a power house with no intention to settle for another 40 years; Grattamacco 2001 is one of the most vertical Bolgheri Rosso ever; Le Macchiole Bolgheri Rosso 2010 is showing a stunning mineral complexity and has no finish while the 2015, 2016 and 2019 vintages are maybe the best ever produced. 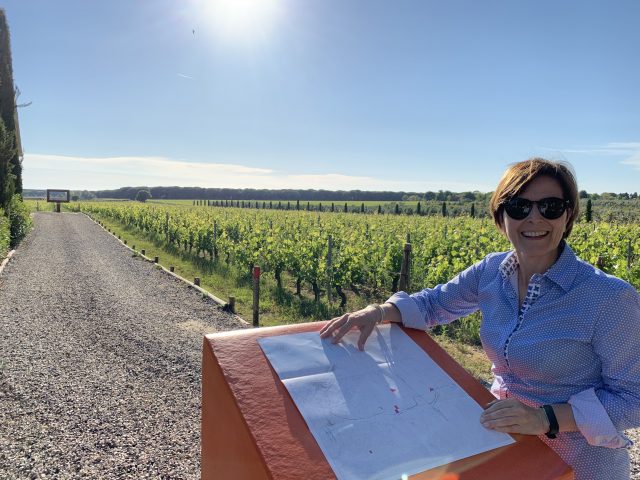 This last vintage, which is the one about to launch on the market is overall the most homogeneous across the board. In the past I used to struggle a bit among perfectly balanced wines right next to overripe samples or over-oaked ones. This year out of a little over 50 samples only 10% where on the over-done ‘Super Tuscan wannabe’ style, while the rest showed clean fruit, very well levigated tannins, length and, for the first time ever, I left the tasting room with this idea of sapidity and salinity, just like I had with my coffee. The wines are indeed showing more elegance and way more transparencies then ever, allowing the presence of the sea to speak positively louder and with a very intense local dialect.

For a list of Bartolotta’s top picks at the tasting, see here: