Dom Ruinart’s first vintage aged under cork rather than crown cap could be the start of something tremendously exciting for the House, says db’s Champagne correspondent Giles Fallowfield. 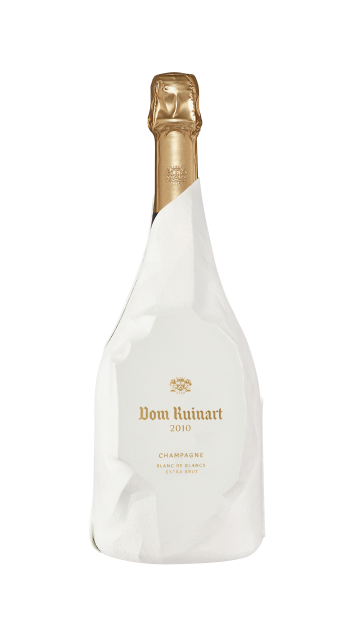 Dom Ruinart Blanc de Blancs 2010 marks a new departure for the house with the release of the first vintage to be aged under cork, rather than crown cap, since Frédéric Panaïotis started as chef de cave began back in 2007. This is an exciting development and something that Panaïotis was interested in introducing ever since he tasted experimental bottlings aged on cork made by former cellarmaster Jean-François Barot (1985-2003) of the 1998 and 2002 vintages when he first arrived at Ruinart.

“The 1998 I tasted when I started was so fresh for ten-year old wine, I was convinced we should make the move, it was just a matter of getting everything else ready,” says Panaïotis. The everything else is principally the state of the art manual disgorging line – only capable of handling 100 bottles an hour – the introduction of jetting technology and training up enough skilled operators to do the disgorging.

“We went to see what they do at Bollinger and with DP2 and DP3,” he says. “It’s great to see the pride the disgorging team take in their highly skilled work, but it’s a much slower process. Jetting for me was a mandatory component, so no oxygen can get in the bottle. If it does, in just 20 seconds you could have an effect similar to ten years ageing.”

According to Panaïotis, the team started with 2010 which “although not widely vintaged in Champagne, was surprisingly good for Chardonnay; Pinot Noir and Meunier were less exciting,” he says.

“The Chardonnay was very, very good like in Burgundy. Other [top Blanc de Blancs] 2010s like Amour de Deutz, Pierre Peters Les Chétillons and Comtes de Champagnes were also released. When we tasted the base wines we were impressed by the intensity and the balance. It’s the best Chardonnay I have had here [at Ruinart] until the 2019 [a future release from Dom Ruinart he’s excited about].”

Compared with the generous 2009 Dom Ruinart we taste alongside, which Panaïotis characterises as “generous, gently reductive, toasty with toasted nuts, crème brulée and notes of candied lemon”, the 2010 has a tension on the palate he loves. He’s a great admirer of top [white] Burgundy for its “gentle reductive character and nuttiness, it’s so sexy. I thought we can do that in Champagne. We wanted to show great Chardonnay is also found here.” As it opens in the glass to reveal more complexity, savouriness while retaining its tight focus, he says it makes the 2009 Dom Ruinart alongside “seem a bit simple”.

The 2010 wine is clearly a reflection of the cooler, wetter year – after a dry summer, with 25% less rain than the ten-year average, there was the equivalent of two months rainfall in mid-August. The extreme conditions of constant heat and humidity favoured the development of botrytis which particularly attacked the Pinot Noir and Meunier. Fortunately Chardonnay, less sensitive at this stage, was spared. September was a milder month and picking began on the 15th with the optimal quality of the Chardonnays maintained until maturity at the end of the harvest.

Panaïotis confirmed that the House did not make any red wine in 2010, so no Dom Ruinart 2010 Rosé was made.

Wetter and cooler than 2009 with around 89 days from flowering to harvesting, nevertheless in 2010 potential alcohol reached 10.4, against a 10 year average of 9.9 and grapes retained good acidity at 8gH2SO2/l (versus 10 year average of 7.4).

For Panaïotis, however, the decade or so that the wine has spent on cork, rather than crown cap, is what helps elevate it. Completely protecting the wine from premature oxidation, he compares its influence to the flattering effect that donning a wet suit has on a slightly fuller figure, holding everything in. Asked about the ageing potential of 2010 he has no hesitation in saying at least another ten years.

In line with its efforts at promoting sustainability and reducing the weight of any packaging, the cleverly designed, chalky white gift box is 60% lighter than the previous packaging for Dom Ruinart.

While there have now been three consecutive Dom Ruinart releases – 2009, 2010 and now 2011 – Panaïotis reveals that he has recently made four consecutive vintages from 2017-2020 with 2019 the pick of the quartet for him.

He also told the sommeliers taking part in the Ruinart Challenge earlier this week, there will be a brand new cuvée from Ruinart on the market next year, while 2013 Dom Ruinart will be released in 2024.