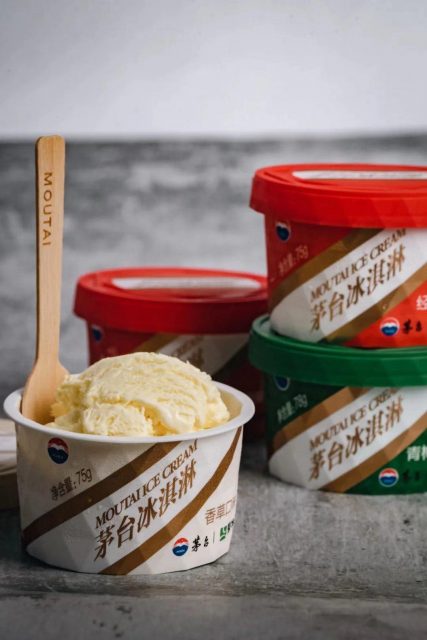 The baijiu-infused ice-cream is co-released by Chinese liquor giant Kweichow Moutai and leading national dairy company Mengniu. Ever since the first ice-cream parlour called iMoutai, offering a selection of 14 Moutai ice-cream flavours, was launched at the brand’s flagship store in the Maotai International Hotel, Maotai, in Southwest China’s Guizhou province on 19 May, the product has swiftly become an internet sensation.

On 29 May, the pre-packed Moutai ice-cream was officially launched in the flagship store and on the brand’s official e-store APP “iMoutai”. Three flavours are offered in the product line, namely original, plum wine and vanilla, priced at RMB 59 up. Each serving contains 2% of Moutai at 53% alcohol. According to the netizens responses, the price point is considered a luxury, especially when it is more expensive than Haagen-Dazs, the most famous ice-cream brand in China.

That said, the expensive price tag didn’t seem to hinder the interest of consumers. As local reports reflected, till 5pm on 29 May, the flagship store had sold more than 5,000 Moutai ice-creams in 7 hours, achieving the sales of over RMB 200,000; while via the “iMoutai” APP 40,000 pieces were sold out in 51 minutes, generating a sales record of about 2.5 million yuan.

As Moutai revealed, the creation of Moutai ice-cream is a strategic move to tap into the young consumer market, who normally have a oldish image towards the strong liquor. The overwhelming sales result and response over social media seem to prove it right.