Carlsberg has launched a trial of fibre bottles made using wood and plant-based materials, claiming to “protect the taste and fizziness” of the beer without the use of glass. 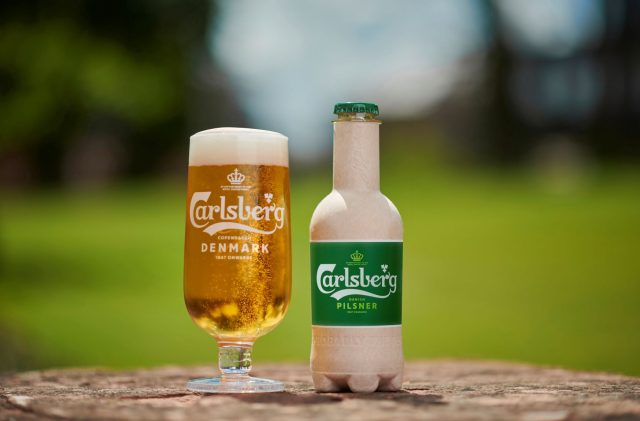 Carlsberg Group has revealed the trial of its new Fibre Bottle, made using wood fibre and a plant-based lining.

The trial is the company’s largest pilot to date, and the new product is set to be sampled to 8,000 consumers across eight pilot markets in Western Europe.

The new containers are partially made up of a plant-based PEF polymer lining, which has been developed by Carlsberg’s partner Avantium. PEF is made entirely from natural raw materials and is compatible with plastic recycling systems.

Carlsberg claimed in a press release about the new trial that the PEF functions as a “highly effective barrier” between the beer from the fibre outer shell, and protects the “taste and fizziness” of the beer successfully.

Simon Boas Hoffmeyer, group sustainability director at Carlsberg, said that the company has been working on the project since 2015.

Carlsberg aims to further improve the bottle’s “environmental footprint and product performance”, according to Hoffmeyer, with the hope that sustainable packaging will continue to become a “norm”.

Stephane Munch, VP group development at Carlsberg, added: “This pilot will serve a greater purpose in testing the production, performance and recycling of this product at scale.

“Identifying and producing PEF, as a competent functional barrier for beer, has been one of our greatest challenges – so getting good test results, collaborating with suppliers and seeing the bottles being filled on the line is a great achievement.”

The new innovation comes at a time when glass manufacturer strikes could cause major shortages for big brands including Carlsberg. Read more on that here.