The world’s largest bottle of whisky, containing 311 litres of 1989 Macallan single malt, was auctioned off for £1.1million on 25 May. 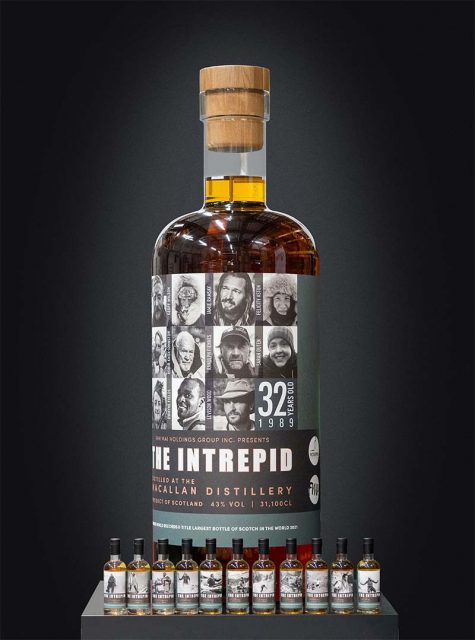 The Intrepid’s impressive measurements could intimidate even the most enthusiastic Scotch fans. At 5ft 11 inches tall, it has two inches on the average Scotsman’s height. The collaboration between Rosewin Holdings and Fah Mai was a celebration of the incredible achievements of 11 explorers, including Sir Ranulph Fiennes.

The auction, held online by Lyon & Turnbull, was predicted to shatter records and reach a £1.5million winning bid. The highest offer may have fallen £400,000 short of the anticipated amount, but Daniel Monk, the brain behind the colossal bottle, was not disappointed:

“For me and the whole team The Intrepid project has always been about more than money. This is a passion project to celebrate the life of my late father, Captain Stanley Monk who was himself an explorer and achieved many amazing things during his life.”

Fittingly, the auction was held on what would have been Captain Monk’s 80th birthday. The sale, still record breaking in terms of the scale of the star item, will provide a sizeable sum of money for charities such as Marie Curie and Campaign Against Living Miserably. 12 50cl bottles and sets of miniatures containing the 1989 Macallan were also auctioned off.

For now the non-supersized “Fine and Rare” label Macallan 1926 remains in the top spot as the most expensive whisky/whiskey ever sold, having sold for £1.5million at Sotheby’s in 2019.

The successful bidder has not been disclosed. Jon Land, director of operations at Rosewin Holdings, expressed joy at being able to be part of the “bonkers project”, and hopes that the “new guardian…has plans to put it on display where it belongs. The story continues…”