Adroit Theory Brewing’s website claims that the company pushes “beer boundaries”. With its latest venture, many commenters believe the US-based brewery may have gone too far.

The current craze for serial killers comes in the form of TV series, podcasts and books. It was perhaps inevitable that, given the startling popularity of the true crime genre, beer would follow suit.

The “Murder Box” contains four beers emblazoned with the names and faces of four of the most notorious criminals in twentieth century America.

The RIS Variant named “Ramirez” is branded with the face of Richard Ramirez. The serial killer and prolific rapist targeted adults and children in California from 1984 to 1985. The Pilsner is named after Jeffrey Dahmer, who murdered 17 men and boys, in some cases committing necrophilia and cannibalism.

The other two beers in the box are branded with Edmund Kemper, nicknamed the “Co-ed Killer”, and John Wayne Gacy, who killed at least 33 young men and boys. Gacy is also the subject of a recently released three part Netflix documentary. 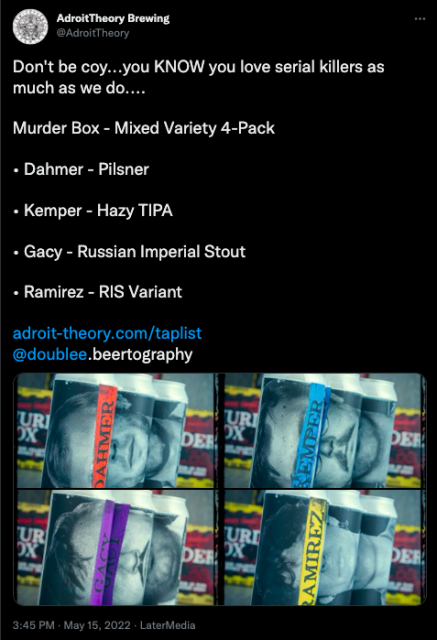 Unsurprisingly, the products have been fiercely criticised as they are seen to celebrate some of the most sadistic figures in modern American history while having no regard for their victims.

Michael Graham, co-founder of Austin Beerworks, asked Adroit Theory: “Are y’all donating all the proceeds to the victims’ families or just profiting off their torture and deaths?”

Beer writer Jason van Rassel stated on Facebook: “I started writing about beer as a hobby in about 2006 or so – at the time, my “real” job was working as a crime reporter…During that time, I covered hundreds of homicides and other horrific crimes, often speaking to the loved ones of murder victims, witnesses and survivors, and I saw their pain and trauma firsthand. Anybody who thinks it’s fun or good marketing to glorify serial killers, no matter how much time has passed, doesn’t have a working moral compass.”

Another user suggested that the decision to brand beer cans with criminals could be reimagined for a more useful purpose: “If you’re going to do this, at least name them after wanted fugitives on the FBI most wanted list. Putting their pictures on your cans will at least be doing some kind of net positive by spreading awareness.”

db has reached out to Adroit Theory Brewing asking whether it regrets this particular branding decision, and the offence it may cause to the friends and family of the victims of these killers.