Union Auboise has launched the cooperative’s first organically certified Champagne under the Devaux label, while the Terroirs & Vignerons de Champagne Group has unveiled a Vin Biologique for its Nicolas Feuillatte brand. 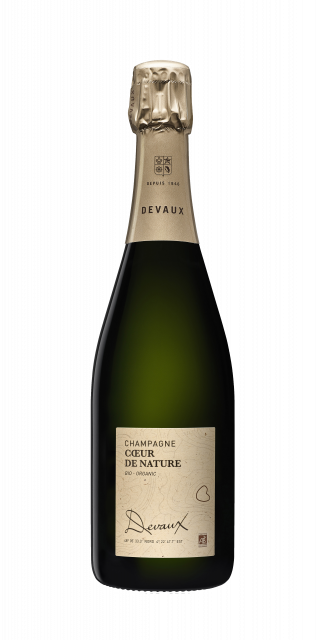 Union Auboise’s new cuvée called Devaux ‘Coeur de Nature’ Organic NV, is drawn from a cross section of certified organically farmed vineyards in the Côte des Bar, where they have been working to convert growers supplying fruit for the brand over the past 15 years and currently have access to 50 hectares that are certified. These are mainly located in the Vallée de l’Ource that runs through Essoyes, but with another 20ha in conversion they expect to have 100ha of organic vineyards within five years.

Made entirely from Pinot Noir the region is renowned for, its 70% based on the fine 2019 harvest with 30% reserve wine and given a 5gms/l dosage.

Union Auboise head winemaker Michel Parisot, says they have been waiting to launch the wine until he felt there were enough different parcels to make a good blend, but said he is “not looking for the same level of complexity in this wine as in the Devaux Cuvée ‘D’ range. The emphasis is more on simple fresh fruit flavours to make an accessible champagne.” Sold thorough UK agents Liberty Wines with an rrp of £45-£50.

The Nicolas Feuillatte brand, made by the CVC Chouilly co-operative that in now part of the mega Terroirs & Vignerons de Champagne Group that includes Castelnau, has also just launched a Vin Biologique certified cuvée called Nicolas Feuillatte Collection Organic Extra Brut. A blend of 60% Pinot Noir and 40% Chardonnay, this too is largely sourced from southernmost Barséquanais region with 40% coming from the largest single cru in Champagne, Les Riceys, while 25% of the fruit comes from the Vallée de la Marne. It’s based on the 2013 harvest, with a low dosage of 4.3gm/l that puts in it the Extra Brut category,

Aimed at the on trade, while it is initially made in quite small volumes it will be available in Germany, Sweden and via the Canadian monopoly with only limited amounts sold in France through Feuillatte’s own outlets at the winery in Chouilly and in Paris priced at €39.

Feuillatte head winemaker Guillaume Roffiaen, says that they have been involved with organic farming for more than ten years with the first organic certified harvest in 2009, but at that time only a handful of co-operative members were farming in this way, while they now they have around 50 growers certified. “Even if it’s increasing, today fewer than 6% of growers in the whole of Champagne are certified.”

Commenting on the wine Roffiaen says: “While it’s ideal as an aperitif, because of its maturity its also suitable for the table to accompany simple and fresh dishes, like salmon gravlax, caviar on black toast, oysters baked in a parmesan crust, or quite simply a goat or sheep’s cheese served with good crusty bread.”