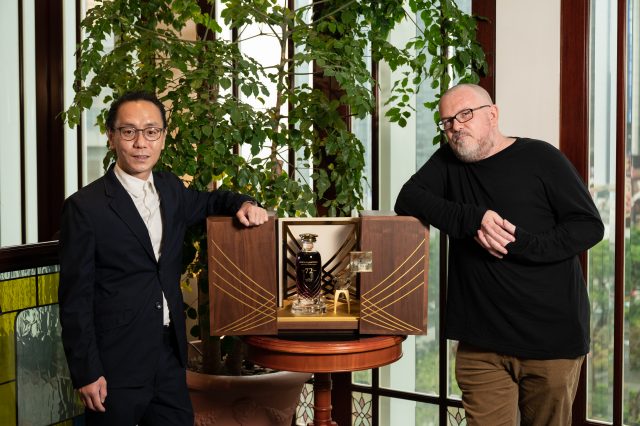 In this upcoming sale on 20 May at Bonham’s, a bottle of Gordon & MacPhail’s Glen Grant 72-year-old whisky is to be auctioned alongside a single one-off NFT artwork. The artiwork original commemorates Hong Kong in the year 1948, when the whisky was first laid down in its cask.

The artwork was commissioned by celebrated South China Morning Post artist Harry Harrison, whose controversial sketches over the years have captured the unique essence of Hong Kong. It also marks the first time Harrison’s work has been minted as an NFT.

Daniel Lam, Director of Fine and Rare Wines and Whisky at Bonham’s, speaks about the May auction: “The sale will be two very special Japanese whiskies, the Yamakazi 50 and 55, which are must-haves for any serious collector, and this Holy Grail of Scottish Single Malts, the Glen Grant 1948 which recently won “Best Cask in the World” in the 2022 Whisky Bible.”

Bottle number 88 of only 290 bottles of this remarkable 72-year-old whisky had set a world record price when auctioned a year ago by Bonham’s. “This time, with a world-first NFT artwork attached, we think it likely that the previous record for a single bottle of the rare Glen Grant 72 year old single malt will be exceeded and could even reach HK$1m,” he added.

The NFT minted alongside one of these exceedingly rare bottles is the first project of Meta Malts, a newly formed Hong Kong company which plans to take the premium whisky market into “the metaverse” and create a Hong Kong-based crypto exchange for trading in rare whisky tokens.

“Our aim ultimately is to bring the realm of investment in fine and rare whisky to a much wider audience through tokenisation, allowing many more whisky enthusiasts to own a share of the world’s rarest malts” said Nicholas Breton, Founder of Meta Malts and CEO of Premier Whisky who masterminded the production of the 72-year-old rare whisky.

“We knew from day one that we had picked a great whisky. Leading the team of experts choosing the cask, Charles MacLean could not have been more fulsome in its praise, so we are especially grateful to our friends at Gordon & MacPhail, the expert creators and custodians of this special cask all these years. It only remained for us to give it the Premier Whisky star treatment commensurate with its quality and prestige—and of course, its inherent value,” says Bob McNab, Managing Director of Premier Whisky, the whisky production specialist behind this rare bottle.