AB InBev is set to brew a beer inspired by the popular Ukrainian beer Chernigivske and hopes to sell interest in its Russian joint venture. 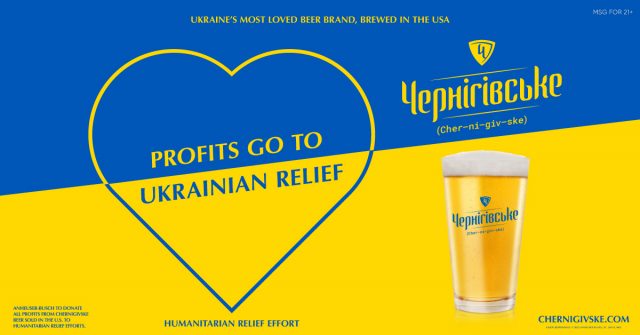 The original Ukrainian beer, also owned by AB InBev, is named after the city of Chernihiv in northern Ukraine and has been brewed in Ukraine since 1988. The new beer, which will share the same name, will be a medium bodied European-style lager with an ABV of 4.8%.

The move, which has been provoked by the brewing behemoth’s desire to provide humanitarian relief for those impacted by the crisis in Ukraine, will see the new beer being brewed in Newark, New Jersey in the US and will roll out on draught in Los Angeles, New York City, Chicago, Houston, and Phoenix from this month.

The new Chernigivske-inspired beers will also be introduced by AB InBev affiliates in Canada and Colombia, and eight other markets across Europe with the profits from the beer sales going to the CARE Ukraine Crisis Fund. As part of this, AB InBev has committed a minimum of US$5 million to aid organisations across Ukraine.

AB Inbev has already provided critical assistance to its 1,800 employees and their families in Ukraine, donated two million cans of emergency drinking water, and partnered with other companies and non-profits to help to send food, blankets, and medical supplies to those in the country and the surrounding refugee relief areas.

Provoked by the war in Ukraine, AB InBev also recently announced its decision to sell its non-controlling interest in the AB InBev Efes joint venture and is in active discussions with its partner, Turkish Brewer Anadolu Efes, to acquire this interest. The company’s request regarding the suspension of the licence for production and sale of Budweiser in Russia will also be part of a potential transaction as it aims to move its business out of the country.

In all over-arching messaging, the company is now reiterating that its focus remains on assisting Ukrainian people and their families while wishing for peace.