This is the oldest evidence of wine in Europe 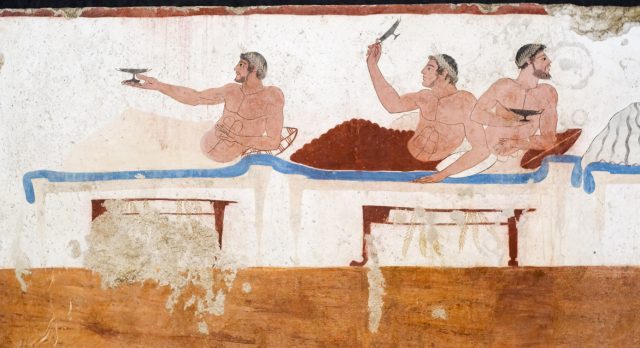 However, those eager for a sip of the incredibly ancient wine may be disappointed. The discovery wasn’t of a long lost amphora, but grape seeds and pomace, preserved in a house fire which took place around 4300 BC, give or take a century.

The first technique utilised was archaeological flotation. The deposit is dissolved in water and fragments of preserved matter float to the top. Professor Valamoti Soultana-Maria archaeobotanically analysed the organic material retrieved from the site, processing “thousands of litres of soil”.

The discovery of the remains of wine was just a small part of the research, which extended across archaeological sites around northern Greece. Soultana-Maria explained that the data gathered “provides a wealth of information on the social and economic organisation in northern Greece, the daily activities of people, their farming and agricultural practices.”

Whether these grapes were cultivated or foraged is unclear, though the find does indicate that early-Bronze Age Greece had developed a society where wine was a part of people’s diets and lives. Viticulture may have arrived from around the Near East, with Georgian winemaking predating that in Greece by approximately two millennia. Alternatively, it could simply have been a case of a convergent development. Wine probably pre-dates beer in Greece by a thousand years.

Wine would go on to take on great importance in Ancient Greece as the drink of choice at academic symposia (which were more like prolonged boozy banquets than academic tutorials). Even under the Roman Empire, Greece was a powerhouse in the ancient wine industry, with an extensive Mediterranean export market.

Though scientific analysis can reveal a startling amount about wine of the past, the absence of written records means that a great deal of information about drinking culture of the time has to be inferred from the available evidence. The precise grape variety used and whether 4300 BC was a particularly good vintage both remain mysteries. As technology and techniques develop, further answers could well emerge. There has been no mention of a Jurassic Park-style experiment to grow vines from the preserved seeds.

Archaeologists are unearthing a great deal concerning the wine drunk by our distant ancestors. Researchers in Israel recently discovered that elites liked their wines flavoured with vanilla.