Monkeys in Panama have been shown to seek out fruit that is ripe enough to have fermented, a new study has revealed. The findings could shine a light on the ‘drunken monkey’ theory, suggesting humans inherited their taste for alcohol from primates. 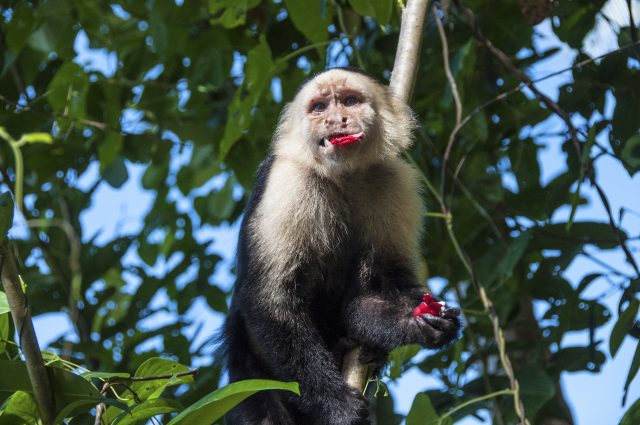 The new study has shown, for the first time, that primates consume fruit containing ethanol, without any influence or interference from humans. Black-handed spider monkeys in Panama were not only shown to seek out ripe fruit that had fermented to contain as much as as much as 2% ethanol, but the study also demonstrated that the monkeys were actually metabolizing the alcohol.

“For the first time, we have been able to show, without a shadow of a doubt, that wild primates, with no human interference, consume fruit-containing ethanol,” said Christina Campbell of California State University, Northridge (CSUN). “This is just one study, and more need to be done, but it looks like there may be some truth to that ‘drunken monkey’ hypothesis — that the proclivity of humans to consume alcohol stems from a deep-rooted affinity of frugivorous (fruit-eating) primates for naturally-occurring ethanol within ripe fruit.”

The drunken monkey hypothesis was posited by UC Berkeley biologist Robert Dudley. Its theory was that the attraction monkeys had towards smell and taste of ethanol is an evolutionary trait that allowed them to seek out ripe, energy-giving fruits before other animals.

However, Dudley did not have data to demonstrate that monkeys preferentially sought out fermented fruits, or that they digested them.

“It is a direct test of the drunken monkey hypothesis,” said Dudley of the new study. “Part one, there is ethanol in the food they’re eating, and they’re eating a lot of fruit. Then, part two, they’re actually metabolizing alcohol — secondary metabolites, ethyl glucuronide and ethyl sulfate are coming out in the urine. What we don’t know is how much of it they’re eating and what the effects are behaviorally and physiologically. But it’s confirmatory.”

Commenting on the behaviour of the monkeys, Campbell said, “The monkeys were likely eating the fruit with ethanol for the calories.

Dudley concurred, adding “They’re probably not getting drunk, because their guts are filling before they reach inebriating levels,” he said. “But it is providing some physiological benefit. Maybe, also, there’s an anti-microbial benefit within the food that they’re consuming, or the activity of the yeast and the microbes may be predigesting the fruit. You can’t rule that out.”

This need for caloric intake from fruit may have also influenced humans in their decisions of what fruits to eat, Campbell noted. “Human ancestors may also have preferentially selected ethanol-laden fruit for consumption, given that it has more calories,” she said. “Psychoactive and hedonic effects of ethanol may similarly result in increased consumption rates and caloric gain.”

“Excessive consumption of alcohol, as with diabetes and obesity, can then be viewed conceptually as a disease of nutritional excess,” she added.