Macron re-election: a victory for the French wine industry?

Emmanuel Macron, the incumbent President of the French Republic who once famously said “a meal without wine is a bit sad”, secured over 58% of the vote in yesterday’s election to defeat far-right candidate Marine Le Pen. 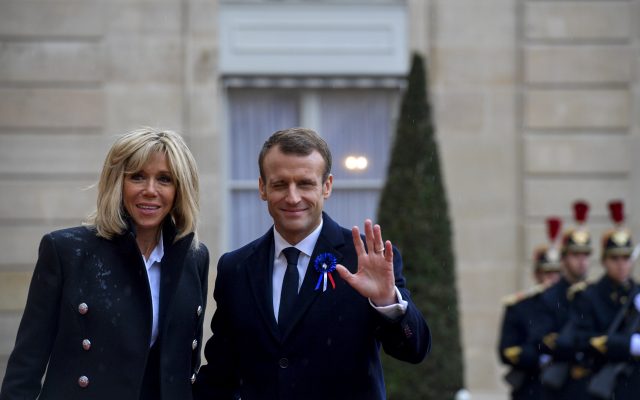 Macron is known for his staunch defence of drinking wine, claiming to enjoy two glasses a day (one with lunch and one with dinner). In 2018, some French doctors accused the President of being irresponsible in his advocation of wine consumption, and have been attempting to break the national habit of enjoying wine on a regular basis. In response, a government spokesperson at the time, Christopher Castaner, said that “wine is a part of our culture, our traditions and our national identity. It is not our enemy.”

For his consistent support for French wine, Revue du Vin de France (the country’s most significant wine magazine) named President Macron “personality of the year” in January of this year. When the news was announced, editorial director Denis Saverot stated that “for the first time in decades, a President of the Republic has declared loud and clear that he loves wine”.

When accepting the award, Macron told the assembled crowd of those in the French wine industry at the ceremony that they “can be proud of what [they] do every single day” before then opting for a globalist theme which still contained an essence of nationalism. “Wine illustrates the fact that to be French, we don’t have to choose to be narrow-minded. Loving our wine regions, our grape varieties, our climates, our châteaux, these ancient techniques, culinary arts, gastronomy and the wines that go with it, also implies embracing the wide open world.”

Though they did not swing the election, French wine centres did demonstrate broad support for Macron. From data displayed by EuroNews, it appears that in Bordeaux approximately 80% of voters chose Macron over Le Pen. However, there wasn’t blanket support in the winemaking regions – the rural/urban divide still manifested itself in the results. In the Burgundy village of Gevrey-Chambertin it was only around 53% who opted for Macron, and in Châteauneuf-du-Pape there was a fairly even split.

The Champagne region voted for Le Pen in force, with the National Rally candidate receiving almost 60% of votes cast. Though she failed to repeat that success across the country, preparations had been made in case of a Le Pen win. The BBC found Champagne bottles labelled with “Marine Présidente”. Though there was no reason to pop the cork in celebration last night, the correspondent noted that the bottle had been emptied nonetheless. 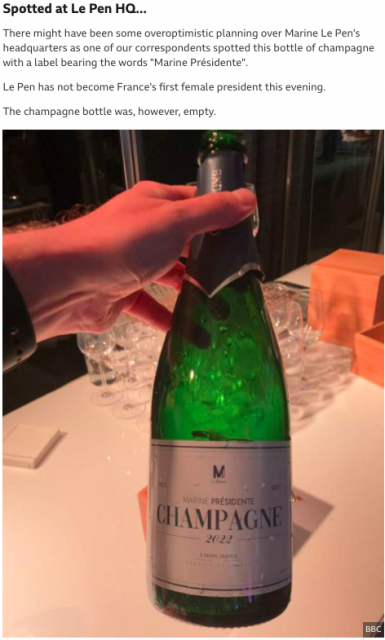 A Macron victory is broadly good news for the French wine industry. In his first term he made it evident that he was against the tightening of restrictions within the alcohol industry. Furthermore, unlike many of his predecessors, he makes no secret of his fondness for France’s most celebrated drink. Though he champions globalism, when it comes to wine the President will always look inwards.