Despite the gathering clouds of inflation and global uncertainty, investing in wine has never been more attractive. Bordeaux Index’s Matthew O’Connell explains what is pulling in a new set of younger investors. 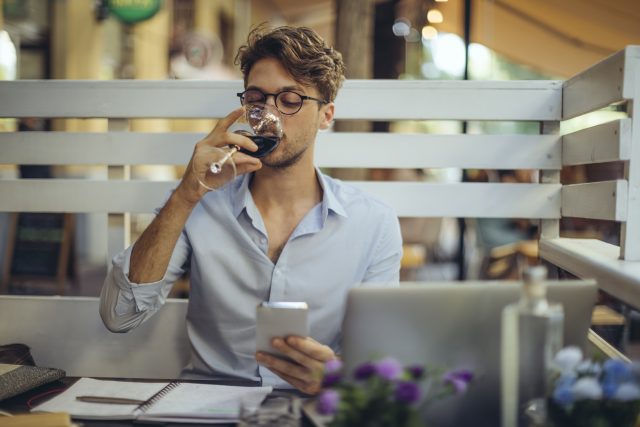 According to the CEO of Bordeaux Index’s LiveTrade online fine wine platform, Matthew O’Connell, there’s been a significant movement away from equity funds and other traditional financial asset classes, with people wanting to invest in a far more active way in alternative assets.

“People have big concerns around inflation – understandably – and therefore they are a bit more focused on hard assets, physical commodities that people perceive as having more intrinsic value,” he explains.

“People are thinking outside the box, moving away from mainstream funds and looking for assets that tick the boxes of wealth preservation in inflationary times while also retaining some strong returns.”

He points out that while gold – the “classic” hard asset – is well known to be resistance to inflation, the returns aren’t necessarily very exciting.  And while UK equities rose 14% last year, fine wine was up 20%. It is also still tracking at 5% for the first three months of 2022, compared to UK equities on 3%.

This strength of the market – which broke records last year in some segments such as Champagne – has proved to be the “missing piece of the puzzle” and there has been a significant uptick of people coming to wine for the first time as a result.

“Wine always performs well in these situations,” he said. “It was flat during the pandemic, but the fact that it had such a strong year last year was the final piece of the puzzle.”

It has proved to be a big draw to people who might not have invested in wine before. And while many of these investors are at the higher end of high net worth, the surprising dynamic is their relative youth – many new wine investors are rom the 25–35-year-old bracket, a younger demographic than previously seen.

O’Connell notes that previously these emerging high net worth individuals might previously have been more tempted by traditional assets and equities, or invest via a financial advisor, but are open minded to a more “hands-on” approach to inflation-busting returns.

“If you buy a wine portfolio, you own the wine yourself, it’s a far more direct relationship with the asset and in line with their investment priorities of the younger demographic,” he says.

Those priorities also tend to include easy access and transparency, as well as the ability to sell out of the asset quickly as well.

“When we get feedback from new users about our LiveTrade trading platform, they are very positive about the fact that we offer a clear two-way pricing on all of the wines,” he said. “Not only do they know what we sell it for and what we will buy it back for, but that if they invest significant capital in wine, they can easily sell it back to us the next day if desired – which is something that historically has been lacking in the wine market but is a strength of equities, for example.”

“If you can do that with wine, it becomes a lot more accessible,” he says. “It means they can invest in an alternative asset without feeling like they are at the same time sacrificing some of the desired transparency of liquidity”.