Pernod Ricard has launched the first Jameson Single Pot Still whiskey in decades, to kick off The Jameson Anthology series. 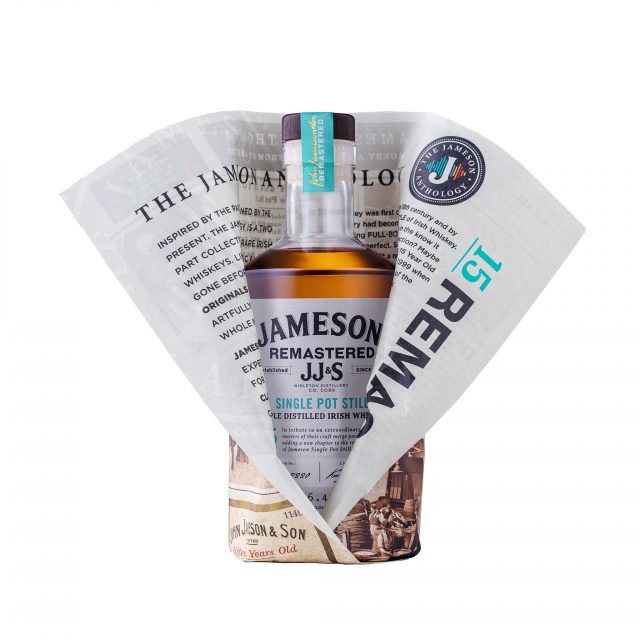 The release, which forms part of the brand’s newly curated collection, will then become joined by other unique limited-edition variants and will be available via two online ballots.

Jameson Remastered, the first volume within The Jameson Anthology, “celebrates the spirit of classic discontinued whiskeys, by reinventing them with modern techniques to deliver a new taste experience” while the soon-to-be-released second volume, Jameson Remixed will “explore and experiment with new tunes from Jameson for an altogether different take on the classic Irish icon” stated the company.

Jameson 15 Year Old Single Pot Still, the first release within the Jameson Remastered Volume, is a reinvention of a much loved classic which was last produced in 2000 as a limited edition offering. The whiskey is composed of three whiskey styles, spanning 15 to 17 years of maturation in American bourbon barrels and Oloroso sherry butts and is presented with the bottle wrapped in newspaper, with one side uncovering Jameson’s heritage and the other marking the present day.

Jameson master distiller Kevin O’Gorman said: “It’s been more than two decades since the last Jameson 15 Year Old was created and it has been a great opportunity to remaster this classic whiskey. For this limited-edition bottling, we seized the opportunity to combine the traditional single pot still style with the strong influence of the sherry casks, which was integral to historic whiskey production. We’re confident to have developed a contemporary iteration of Jameson 15 Year Old that pays tribute to the torch bearers who put Irish whiskey on the map, whilst nodding to the current generation of talented craftspeople at Midleton Distillery.”

Jameson blender Deirdre O’Carroll added: “It has been a pleasure and a privilege to work with the team to bring Jameson fans a new 15 Year Old that has been remastered for the modern day. The inclusion of the sherry casks creates incredibly rich flavours and an extra-long fusion of fruits and spices, in line with traditional pot still flavours that are known and loved. We’re looking forward to continuing to delight fans with more to come within The Jameson Anthology, which we hope will be music to whiskey fans’ ears.”

Jameson 15 Year Old Single Pot Still has been bottled at an 56.4% ABV and comes in a 500ml bottle which will retail at €300 with a limited quantity of 2,220 bottles available through two online ballots.

To enter the ballot, visit the brand’s site and sign up.