A venomous snake, which was still alive after being sealed in a liquor flask in China for a year, bit the man who dared to open the lid. 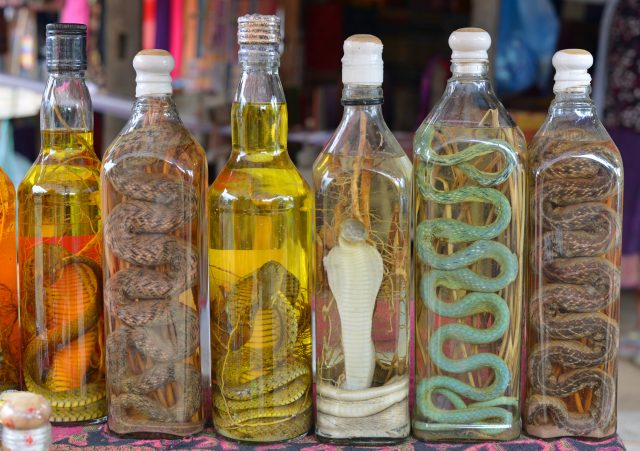 The snake, which reportedly “came back to life”, bit a man from Heilongjiang province in northernmost China after he prised the lid open to take a look inside.

The man in question, whose son had been diagnosed with a chronic illness, was allegedly trying to heal his son with a dose of snake wine.

Snake wine, which is often referred to across Asia for having health benefits, is said to be prepared by putting an entire snake, sometimes while still alive, in a jar of alcohol – often rice wine.

The man reportedly purchased three venomous snakes and soaked them in alcohol for marination. A year later, after he felt that the snake wine had “enough medicinal properties” he then unsealed the flask for consumption but unexpectedly, the snakes in each flask were still alive, and one of them lashed out with a venomous bite. After immediate hospital treatment, it was reported that the man survived the attack.

Reports highlighted how this kind of incident, while unexpected, is actually not that strange and, according to experts, snakes can survive the marination in alcohol for 12 months without dying, for a few reasons.

One possibility is that the container might not have been sealed tightly and some air might still have entered, providing enough oxygen for the snake to stay alive. Others pointed out that snakes, which are cold-blooded animals, are often able to survive in low oxygen environments and can enter a “dormant state” in such conditions by suppressing their metabolic rate. It was also predicted that after the alcohol container was unsealed, the snake may have received a large amount of oxygen which could have “revived” it further.