Friday 30 March 2022 is set to become a defining moment in the evolution of La Place de Bordeaux and, more importantly, the history of Chinese viticulture, as Ao Yun 2018 becomes the first Chinese grand cru to be released through the Bordeaux négociant system. 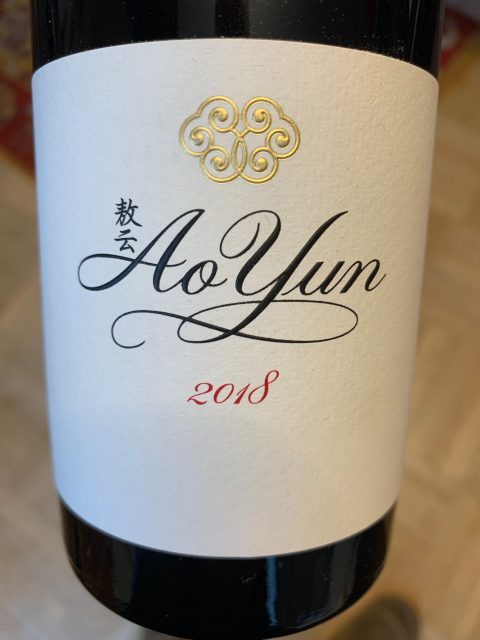 The wine will continue to be distributed in mainland China through Moët & Hennessy directly, with La Place de Bordeaux becoming responsible for the remaining global distribution. The courtier on la place is Bureau Lévêque who will work, in the first instance, with a small number of carefully-chosen négociants.

The vineyard project itself is an exciting one, the product of a four-year long search by Tony Jordan for Moët & Hennessy to identify the prime site in mainland China for the creation of a world class cru. That search traversed the country, from north to south, east to west before it finally culminated in the selection of Ao Yun in North Yunnan in the foothills of the Himalayas, not far from Shangri La itself. The area is part of the UNESCO-protected area of the three parallel rivers, below the 6,800 metre summit of the sacred mountain of Meili.

As this already suggests, the location itself is incredibly remote, extreme in all kinds of ways and utterly unique. It produces a wine that is fascinating, appropriately ethereal and exceptional – and perhaps rather different than one might imagine.

The key to all of this, as it so often is, is terroir – indeed, not just one terroir, but a patchwork of multiple fragmented terroirs that express themselves very differently from one vintage (and one growing season) to another. 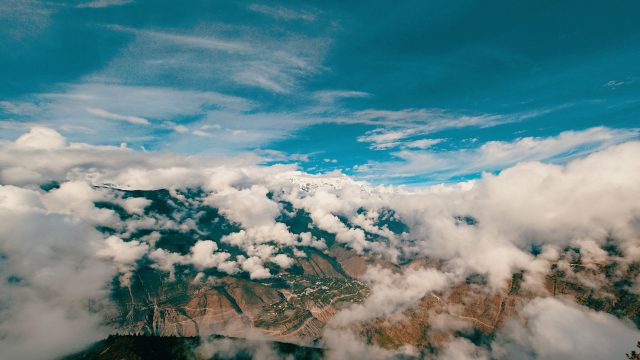 Ao Yun comes, in essence, from vines grown in and around four tiny villages, two each on either side of the Mekong river valley. The vineyards are all at extreme altitude – between 2,100 and 2,600 metres, to be more precise. But, significantly, there is also a very significant variation in altitude between them. This leads to extreme differences in harvesting dates, which range, for the 2018 vintage for instance, from early September until mid-November.

The majority of the vines are grown on terraces. The vineyards vary too in soil composition, exposure, drainage and severity of slope (from steep to extreme!). Indeed, Maxence Dulou, Ao Yun’s Estate and Technical Director, has identified to date some 35 distinct and different terroirs present in 314 blocks and 727 sub-blocks.

Each vineyard is farmed organically using an indigenous form of agroecology practiced in the region for centuries by local families (well over 100) who tend the vines without the use of any mechanical intervention. It is estimated that each hectare requires on average 3,500 hours of work by hand per year. As Jean-Guillaume Prats is reported to have said (perhaps apocryphally), the logistics of making this wine are a nightmare and it costs more to produce than Chateau d’Yquem itself.

Around half of the current 27 hectares under vine were planted on ungrafted rootstock in 2000. These older vines are exclusively Cabernet Sauvignon and Cabernet Franc. In 2013 Merlot, Petit Verdot, Syrah and more Cabernet Sauvignon and Franc were planted by the Moët Hennessy team, this time on grafted rootstock. New terraces are in the process of being planted with additional Syrah, Cabernet Franc and, for the first time, Malbec in the village of Sinong.

The philosophy of the wine is, as Maxence Dulou eloquently explains, a subtle combination of the Burgundian and the Bordelais. From Burgundy, Ao Yun takes the idea of fragmented terroirs vinified separately and tiny plots to express those terroirs. And from Bordeaux it takes the idea of blending (of both varietals and of terroirs) to produce layering and complexity and also the idea that what goes into the final blend is based on a blind-tasted selection and not a prejudgement of the respective relative merits of particular terroirs. 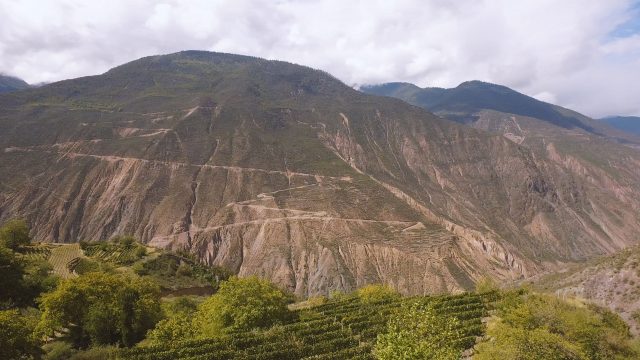 That final point is very interesting and reflects, at least in part, the propensity of Ao Yun’s terroirs, as such high altitude and ranging over quite a variation in altitude, to express themselves very differently from one vintage to the next. Climate and terroir expression interact in some very fascinating ways in the foothills of the Himalayas.

Selection, as this implies, is crucial. It is also very strict. Only around 50% of the total production has made it into the grand vin in the 2018 vintage, with around 40% of the harvest discarded. The remaining 10% or so is bottled as four separate village crus – which I hope to have the chance to taste at some later stage.

The characteristics of this unique and fascinating wine are shaped very much by the singularity of the terroirs from which Ao Yun comes and the distinctiveness of its micro-climate.

Above all, Ao Yun flourishes and is made possible by the rain shadow of the mountains. Scarcely less significant and integral to its identity as a wine is the high UV-levels present at this kind of altitude. This produces thicker skins, riper pips and a very high ratio of physical matter to juice, greatly adding to the density, concentration and ageing potential of the wine and to the characteristic finesse of its tannins.

The partial shade offered by the mountains is also crucial. This reduces direct sun exposure by around 30% daily, extending the ripening period and hang-time whilst helping to ensure that the pip tannins achieve full ripeness without excessive potential alcohol levels.

And, finally the combination of a cool climate and large differences between day and night-time temperatures serve to lock-in freshness, binding it into the very core and structure of the wine.

In comparison to its predecessors, 2018 is something of a cooler vintage, preferred by Maxence Dulou to the 2016 and 2017. It also sees the highest proportion of Merlot in the final blend.

As he explains, “a wetter and warmer winter gave an early start to the growing season, while less rain and a warmer spring accelerated growth and permitted the creation of hydric stress that lasted throughout the season despite a little more rain than usual in the summer. The summer rains were well distributed compared to the two previous vintages … A dry and cool autumn allowed the fruit to ripen well and develop beautiful vintage and terroir traits”.

Ao Yun 2018 (Shangri La; 60% Cabernet Sauvignon, 19% Cabernet Franc, 10% Merlot, 7% Syrah and 4% Petit Verdot; pH 3.35 – probably the lowest of any Cabernet-dominant grand cru I have ever tasted; 15% alcohol; around 26,000 bottles produced; aged in two phases – the first 5 months in a combination of Chinese earthenware jars and oak barrels, then 10 further months in a combination of new and used oak barrels; picked between 7 September and 15 November 2018; a final yield of just 22 hl/ha). Magenta/lilac rim, with crimson highlights, this is viscous, limpid and glossy at the core. Very beautiful and fresh aromatically, with a profoundly aerial and vertical expression on the nose. We find radiantly pure dark berry fruit – cassis, predominantly, but also blueberries, crushed brambles and mulberries; there is a lovely deep earthiness, a fresh herbal, pine resin and gorse note too and just a hint of peach kernel and green leaf tea. On the palate, this has a lovely pick-up, with great forward momentum on the palate and an impressively refined and detailed sense of structure. Concentrated, racy, energetic and very pure with a dense and compact, tightly-wound spine and the constant sense of fresh, sapid, juicy fruit being dripped onto the palate, giving this not just great length but also a sustained sense of bright, crystalline freshness. The oak has been very skilfully and unobtrusively used here, bringing just a little touch of spice and reinforcing the natural smokiness. I am struck most of all by the purity of the fruit and the chiselled structure, the slightly crumbly chalky tannins and the composure, balance and sheer harmony of this wine in its youth. There’s also a lovely cool, stony minerality and just a hint of salinity that accentuates the long, sapid and very refreshing finish. 95+.