The grappa-loving wine manager for Dublin’s ELY Hospitality Group shares his love for Barolo, dislike for the term “natural” wine, and insight into his background in microbiology with Douglas Blyde.

1976, which was apparently better for humans than wines. That said, the last bottle I drank from that vintage a couple of years ago was CVNE Imperial Gran Reserva which was ageing better than me.

What was the last wine to move you?

Brovia Brea Vigna Ca’Mia Barolo 2010 over Christmas. One of those wines that required a moment of quiet introspection; just block out the noise and savour.

What has been a thought-provoking vineyard visit?

Living in a country where we don’t produce wine, I jump at the chance to visit vineyards any time I can – and there is always something to be learned. The most thought-provoking recent visits were in Victoria and South Australia where the consequences of climate change were very clearly laid bare.

How did you come to be at Ely Wine Bar?

I first joined back in 2001, left in 2002 then re-joined in 2012, by which time Ely had become a group of three restaurants. In the decade since, we’ve closed one, opened another, and added a retail and online dimension. We’ve also started importing from a select number of wineries, exclusively for our restaurants and wine stores. What keeps me with Ely is this ever-changing dynamic. There are not many places where you can oversee sourcing, importing, retail and restaurant sales, as well as tastings and events. There’s always something new on the horizon. 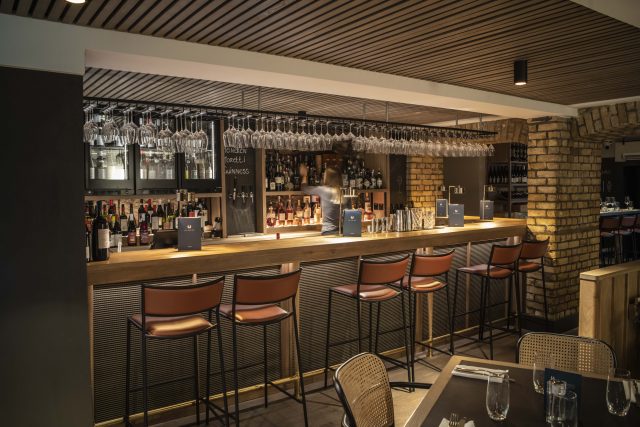 Describe your approach to the core venue’s wine list?

The list at the original Ely Wine Bar has undergone many changes since opening in 1999. But the most dramatic occurred when the Covid-enforced closures forced us to sell a lot of fine wines through the wine store. When we were finally able to reopen, we had to drastically change the format of the list which went from 28 pages to just 13. Now, rather than having extensive selections in every region, we introduced featured producers: winemakers and wineries we are particularly excited by, listing a broad range of their wines. These change every couple of months. So far, we’ve included: Brovia Barolo, Algueira in Ribeira Sacra, Jonathan Didier Pabiot in Pouilly-Fumé, Bindi from Macedon Ranges, Arpepe from Valtellina, Charles Heidsieck and Henschke.

The list opens with the words, “Sustainability, quality and value are our guiding principles, and our only ethos is drinkability”, and it’s true. We list wines which are organic and biodynamic, as well as conventionally produced wines, and minimum intervention and low sulphur wines – I don’t like the term “Natural” which implies if some are, then others are somehow “not natural”, which is just crap. First and foremost, we want wines that, after the first glass, you’ll want to drink a second.

What has been a standout pairing with chef, Luca Rocco’s cuisine?

Although with us for a few years, Luca only recently took over as head chef. He hails from the Veneto and the influences of his home are adding a new dimension to the menu. His seabass ceviche with pickled melon, pepper and parsley is a delight on its own but really sings alongside a glass of Brovia’s Roero Arneis.

Torrontes. Which doesn’t work with anything.

How does the setting of the original Ely Place site enhance the enjoyment of wine?

The wine bar covers the ground floor and basement of one of Dublin’s beautiful Georgian houses. The ground floor room has a grand feel to it, with high ceilings and big windows, and works as a dining room and a private room, being incredibly popular for small, city weddings. Downstairs is more typically wine bar: cosy, comfortable and conducive to long conversations. It’s the sort of place where time passes differently…

We have two cellars off the basement along with temperature-controlled EuroCaves for the fine wines. We also have a small warehouse for the wines we import directly.

I’m fond of a nice Grappa.

What is the most impressive spirit you work with?

Give me the new release of the Midleton Very Rare 2021 and I’m a very happy man.

What do you crave after a long day?

Sleep usually, but depending on the day, a crisp white to quench the thirst.

How seriously do you take non-alcoholic drinks?

Not as seriously as I need to. However, I have people around me who do, thankfully, and Gabriel, our cocktail and drinks maestro in the wine bar has created some fantastic non-alcoholic drinks and cocktails in the Wine Bar.

What did you study?

My first love was microbiology – viruses in particular – long before they became so popular.

Neither, but at a push, I’d say Jim Carey (of the Truman Show, not Ace Ventura).

Take the lift or climb the stairs

Stairs. Every step counts these days.

Who should prospective team members contact if they want to the team?

They can contact me ( info@elywinebar.com). A love of wine, a willingness to learn and a positive attitude are most important.