We reveal how a 29 year-old CEO is strengthening a family-owned Spanish wine group by focusing on quality and sustainability, with a 100% conversion to organic grape growing underway. 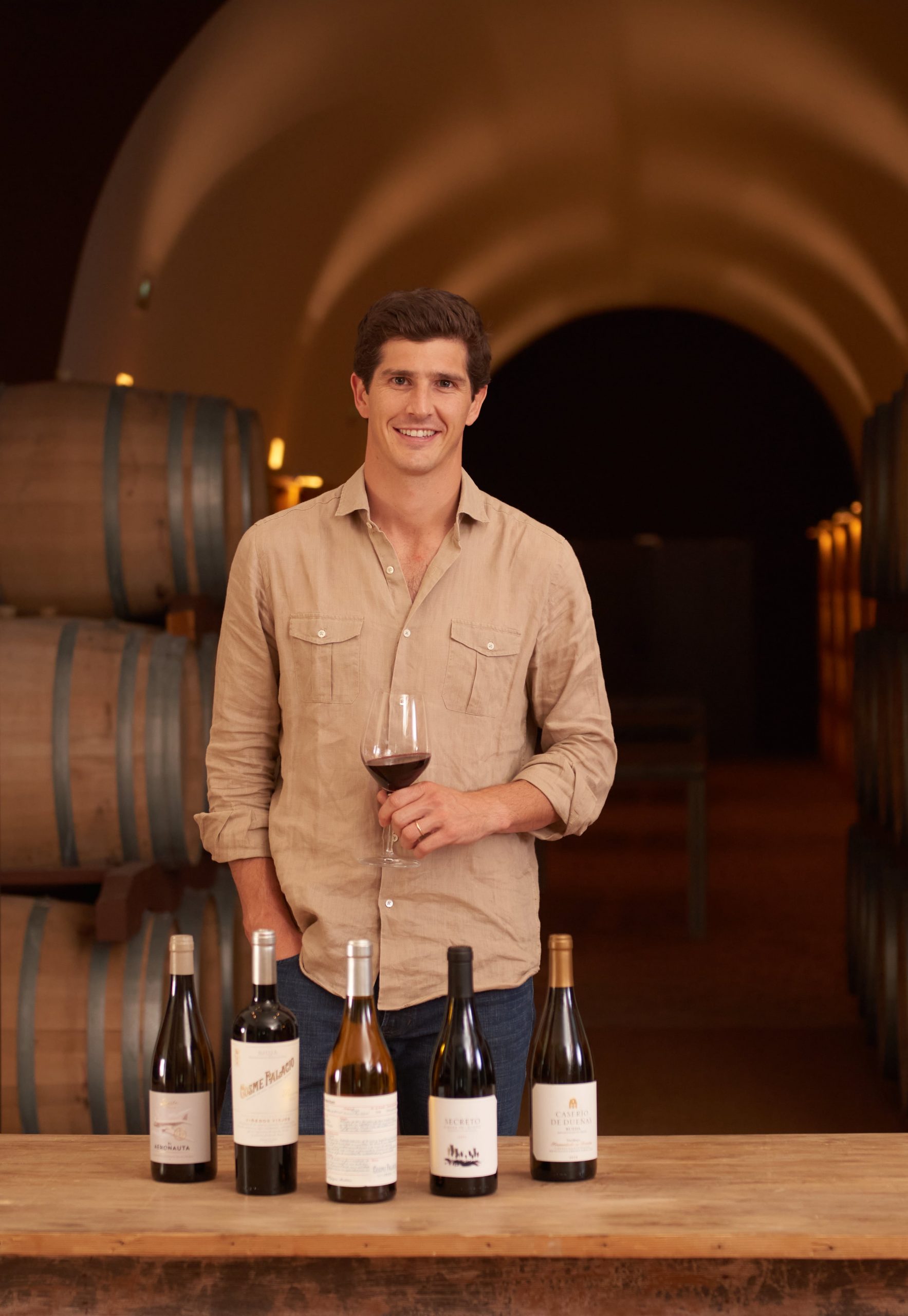 Having entered the wine business in January last year following a career as an investment banker in London and New York, Gonzalo Entrecanales has now spent six months as CEO of his family’s wine group, called Entrecanales Domecq e Hijos – the new name for Grupo Bodegas Palacio 1894 following a rebrand in June 2021.

With wineries in Rioja, Ribera del Duero, Toro, Rueda and Valdeorras, the business has over 400 hectares of vineyards in some of Spain’s most prestigious denominations, and it’s Gonzalo’s aim to improve its existing offer, rather than expand its landholdings, or increase production.

To do this, the 29 year-old, who was partly educated in the UK, and speaks perfect English, is particularly focused on sustainable production, with a conversion underway to organic viticulture across the entire company, boosted by the adoption of regenerative agricultural practices, and renewable energy too.

It’s “a large investment” he told db yesterday, commenting that the group is “investing everything we earn and more,” with monies being spent on both the vineyards and wineries, so the group can “benefit in three to four year’s time”.

“We are determined to put things right,” he said.

The family-owned company was in fact founded by Gonzalo’s grandfather 35 years ago, who began the business with Viña Mayor in Ribera del Duero in 1986, just four years after the DO was established, followed by the acquisition of Cosme Palacio in Rioja and then Caserío de Dueñas in Rueda, and later Bodegas y Viñedos Anzil in Toro, and more recently, El Aeronauta in Valdeorras.

The family’s main source of income was, however, a different operation: an infrastructure, construction and renewable energy business called Acciona, which, until recently, was a shareholder in the wine business, and explains a longstanding focus on achieving carbon neutrality for production processes at the wineries.

But, with Gonzalo’s family now taking full ownership of the wine group, it was decided that the company’s name should be changed to take on his family’s full name, and hence, as reported by db six months ago, the former Grupo Bodegas Palacio 1894 became Entrecanales Domecq e Hijos.

Such a move Gonzalo said was “to hold us accountable for our long-term strategy,” adding, “We don’t want people thinking we are investing in the business to sell it; we have a strong emotional attachment to what has been done over the past 35 years, and what better way to show that then to give it your name.”

Continuing, he said, “The company has been through a few name changes in the past 35 years, so we wanted to give it something that was not going to change, and a name that draws you back to the origins of the company – Entrecanales comes from my grandfather’s side, and Domecq from my grandmother.”

He then commented, “It was her that made my grandfather so enthusiastic about wine by taking him to Jerez,” where the Domecq family were famous and powerful sherry producers for over a century until the fortified wine business was sold to Allied Lyons in 1994, creating Allied Domecq.

Indeed, it is due to this past connection with Jerez that he might be tempted to expand the group with a winery in this part of Spain, although not in the near future.

“For the next few years, we have enough on our plate without expanding,” he said, adding that it was not his intention to increase the level of production at the group’s existing wineries either.

“Volume is not our focus,” he stated, “but we want to move towards more premium wines.”

Gonzalo, who spent the first six months at the wine group supported by former CEO Antonio Soto, said that the pair had worked together to create a strategy for the company, before Soto “agreed to step to one side, and I took on the position as CEO.”

This plan for the business centres on “four pillars” according to Gonzalo, which are, “Excellence, sustainability, innovation, and transparency.”

Concerning the first, he said that improving wine quality will require the group to “work more closely with the vineyard, and so we are investing a lot into parcels and new long-term agreements so we have control of the sourcing for all our top quality wines.”

As for the pillar of sustainability, this is a “very obvious one for my family” said Gonzalo, with the aforementioned Entrecanales renewable energy business called Acciona meaning “we carry sustainability in our veins.”

Nevertheless, he said that the wine group would be “doubling our efforts on sustainable production and communicating that,” mentioning the likes of Coral Ethical Wine – which was named Green Launch of the Year in 2021’s Green Awards.

In terms of innovation, he said that the company would be looking closely at “digitalisation” and how that can improve processes from sales to marketing, along with new winemaking techniques.

Finally, he stressed the importance of transparency for both employees in the company and consumers of its products. “We need to bring the consumer closer to how wine is made, why it tastes different, and why there are different prices,” he said, adding that he also plans to “communicate our strategy to our people, so they will hold us accountable.”

But the real focus for Gonzalo concerns the move to improve the vineyard management across the group’s estates to improve wine quality, soil health and biodiversity at the properties.

“It is all well and good being carbon neutral but we are in the agricultural business so we also need to be mindful of what we are doing to the environment, how we grow the grapes, and being fully organic is on our to do list, and we are almost fully certified in Rueda and Toro,” he said, adding, “with the rest under conversion”.

Commenting that he believes that in three year’s time the entire group should be certified organic, he did note that the main challenge was administrative, commenting that there are a lot of “hurdles” when it comes to group certification when there are wineries in different regions.

Beyond organic practices, Gonazalo is investing in regenerative agricultural practices to improve soil quality and carbon content while improving biodiversity at the group’s properties with tree planting and cover crops, as well as making changes to water use.

“It’s lots of small things that add together to create a healthy and sustainable estate,” he said, noting that since changes were made to the Rueda property he has seen an increase in birdlife, while the river that flows through the estate is now following its natural course, which means it floods less often, and he added, “the quality of the grapes is getting better”.

Summing up his thoughts on the need to move to eco-friendly environmental management of wine estates, he said, “This is definitely something we all have to think about.”